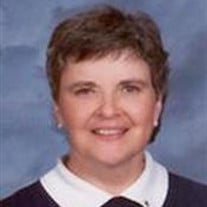 Mabel (Sorge) Hogeland passed away on February 24, 2013 at Thayer County Health Services surrounded by loved ones. Mabel was born November 16 during the time of the Blizzard of 1948. She and her mother were in the Reed Hospital in Deshler NE, approximately one week before her father was able to bring both of them home through the snow. Her sister Dorothy remembers the snow had piled up so bad that, “Dad had left a vehicle at then Highway 3 north of Deshler which was one mile south of their home. He did this to bring them home after the roads were cleared. Dad took a team of horses and buggy to travel back and forth to his vehicle.” Mabel was baptized and confirmed in the Lutheran faith at St. Peter Lutheran Church in Deshler. She attended parochial school and graduated from Deshler High School in 1967. She then moved to Kearney NE, where she worked at Central Typewriter as a clerk/typist. Judge Hammer married James and Mabel Hogeland in his chambers in Kearney NE, on April 9, 1969. To this union two sons were born, Eric and Sam. Jim and Mabel moved to Arcadia NE, when he started teaching and Mabel was a stay-at-home mom until they moved to Bruning NE. A teaching salary did not cover all of the expenses of a growing family. Mabel was able to find work cleaning homes and Dr. Penry’s clinic to help out with the family expenses. She worked ten years at the Bruning Elementary School with the teachers in the classrooms and when her children were in college and finances were again tight, she was given the opportunity to work with the public (the older generation-teens to retirees) at Bruning State Bank for twenty plus years before her cancer disability required that she relinquish the job she truly loved: working with the community of friends and loved ones that she enjoyed so much. Mabel was a member of the Bruning Legion Auxiliary and Bruning United Methodist Church and Church Women. She is preceded in death by her parents, Ernest and Viola (Kramp) Sorge of Deshler NE, brother Allen Sorge of Hayden ID, brother-in-law Gene Anderson of Lincoln NE and Jim’s parents, Bonnie and Florence (Decker) Hogeland of Bloomington NE. She is remembered by her husband James of Bruning NE, her sons Eric Hogeland of Crete NE, and Sam (and Alyssa) Hogeland of Columbus NE. Her grandchildren are Taylor and Dylan Hogeland of Lincoln NE, and Brent, Kaitlyn and Madelyn Hogeland of Columbus NE. Her living siblings are sisters Dorothy (and Allen) Boss of Davenport NE, and her families, Esther Cellan of Ashley OH, and her families and Eunice Anderson of Lincoln NE, and her families. Her brothers are Victor (and Carol) Sorge of Deshler NE, and his families, Harvey (and Linda) Sorge of Deshler NE, and his families, Norman (and Peggy) Sorge of Deshler NE, and his families, and her sister-in-law Janis Sorge of Coeur d’Alene ID, and her families. She is also remembered by her husband’s brother Steven (and Patricia) Hogeland of Bloomington and their families. Mabel dearly loved a host of family and friends who were so faithful to call, visit and send cards, etc. through the time of her long illness of cancer. She would like her memorial to be sent to St. Jude Children’s Cancer Research Hospital to help fight this dreaded disease, especially in the children. Funeral service for Mabel will be Wednesday, February 27, 2013 at 10:00 a.m. at the United Methodist Church in Bruning, Nebraska. Graveside service will be held at the Maple Grove Cemetery in Bloomington, Nebraska at 2:30 p.m. on Wednesday. Visitation will begin Tuesday at 1:00 p.m. until 8:00 p.m. with family greeting friends from 5:00 until 7:00 at the Farmer & Son Funeral Home in Geneva, Nebraska.

Mabel (Sorge) Hogeland passed away on February 24, 2013 at Thayer County Health Services surrounded by loved ones. Mabel was born November 16 during the time of the Blizzard of 1948. She and her mother were in the Reed Hospital in Deshler... View Obituary & Service Information

The family of Mabel E. Hogeland created this Life Tributes page to make it easy to share your memories.

Send flowers to the Hogeland family.