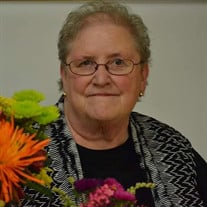 Marcia Lynn Matthies was born to Leslie “Bud” Dale Matthies and Shirley Elaine (Stetina) Matthies on April 28, 1950 at Lynch Clinic in Fairbury, Nebraska, and passed away on November 13, 2019, at Bryan West Hospital in Lincoln, Nebraska at the age of 69 years, 6 months, and 16 days. She was one of 6 children born in the family. Marcia was baptized and confirmed at St. John’s Lutheran Church in Ohiowa, Nebraska. She graduated from Ohiowa High School in May of 1968. After high school, Marcia attended Lincoln School of Commerce and graduated in 1969 with a degree as an Executive Secretary. After college, Marcia moved to Park Ridge, Illinois and worked for her Aunt Arlene and Uncle Bill Harris in their medical supply business. In 1971, Marcia moved back to Lincoln, Nebraska where she began her life-long career in health care. From 1971 to 2010 she worked for various places including Nebraska Health Care Association, Hospice Care Of Nebraska, and Haven Manor in Lincoln, Nebraska. In April of 2010, Marcia started a new business called ‘At Your Side,’ working with trust officers and attorneys in meeting the health care needs of senior citizens. Marcia also worked as the Outreach Coordinator of the Nebraska State Stroke Association. She was currently serving as a member or on the boards of South Nebraska Respite Network, Coalition for Older Adult Health Promotion, Lincoln End Of Life Coalition, Kaplan University, LPN Advisory Board, Senior Companion/Foster Grandparent Advisory Board, Facilitator of Comeback Club Support Group at Madonna Rehabilitation Hospital, Lincoln Stroke Advisory Board, and the Nebraska Stroke Advisory Council. Marcia was also an avid crafter. If you needed something, she could make it, or she knew where she could get it. She was a big fan of stock car racing, including following the Ed & Diane Tuttle family. If there was a race on the weekend, she was there. Before her health began to decline, she loved to come home to the farm. Coming home always included a stop at the Ohiowa Café, where she would meet up with Barbie, Sue, Nancy and others. Marcia’s nieces and nephews were her biggest joy in her life. She was always there for them if they needed anything. The last few years she was involved with the Scottish Highland Cattle Association, donating silent auction items and even being the announcer at the Husker Highland Show in York, Nebraska. One thing is certain, if you ever met Marcia, you were not about to forget her. She will certainly be missed by all of the people that she was associated with through family, friendship, and work. Marcia was preceded in death by her parents Leslie “Bud” & Shirley Matthies; brothers Michael Leslie and Kent Alan Matthies; and sister Deanna Kay Turner. She is survived by brother Rod Matthies and wife, Terri and Jack Matthies and wife Deb all of Ohiowa, Nebraska; brother-in-law Richard Turner of Lincoln, Nebraska; nephews Christopher Reetz and wife Emilye, Atlee Reetz and wife Chrissy, Brooks Reetz and fiance Erienne Wissink, Spencer Reetz, Jeromy Matthies and wife Jenna, Jason Matthies; nieces Jennifer Rinehart & husband Jeremy and Leslie Turner. A Memorial Service for Marcia was held on Friday, November 22, 2019 at 10:30 a.m. at St. John’s Lutheran Church in Ohiowa, Nebraska. PMA Jim Germer & Kim Dunker officiated the service. Nancy Cradduck accompanied the congregation in the singing of “Amazing Grace.” The recorded selection “You Raise Me Up” was also played during the service. Honorary pallbearers for the service included Spencer Reetz, Christopher Reetz, Atlee Reetz, Brooks Reetz, Jeromy Matthies, and Jason Matthies. Inurnment was held in the Ohiowa Public Cemetery following the Memorial Service. Farmer & Son Funeral Home was in care of the arrangements and online condolences can be left at www.farmerandsonfuneralhome.com. Memorials are suggested to the Nebraska State Stroke Association, 6900 L Street, Lincoln, NE 68510.

The family of Marcia L. Matthies created this Life Tributes page to make it easy to share your memories.

Send flowers to the Matthies family.