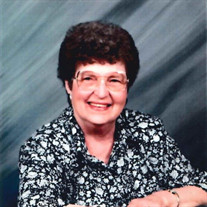 A Memorial Service for Margaretha was held on Friday, September 25, 2020 at 10:00 a.m. at Farmer & Son Funeral Home in Geneva, Nebraska with Pastor Daniel Evertson presiding. There was one song for Margaretha’s service, “Save A Place” by Matthew West. Honorary Urn Bearers included Kris Ekeler, Lori Roth, Julie Bristol, Suzanne Keenan, Lavina Schmer and Joan Softley. Graveside Services were conducted following the Memorial Service in the Grafton Public Cemetery in rural Grafton, Nebraska. In Lieu of Flowers - Memorials were directed to the family to be designated at a later date. Farmer & Son Funeral Home was in charge of funeral arrangements. Margaretha (Mickey) Ann Holland, 95, of Grafton, passed away on Monday, September 21, 2020. Mickey was born December 25, 1924, to John and Martha Bruning. After graduating Harvard High School, she taught in a one-room school in the area. Later she moved to Lincoln and worked for many years at the Elgin Watch Factory. She married the love of her life Mayo Holland in 1954 and in the early ‘60s moved to Grafton to raise their family. They were blessed with six children. Mickey retired from the Grafton Public School where she spent many years cooking for her beloved students. Mickey is survived by her son, Mike; daughters, Murd (Danny), Jessie (Don), and Rose; son-in-law, Rollie; sister, Gloria; as well as many grandchildren and great-grandchildren. Mickey is preceded in death by her husband, Mayo; daughters, Linda and Roxann (Ann); sister, Marge; and brothers, Eugene and Bernard.

A Memorial Service for Margaretha was held on Friday, September 25, 2020 at 10:00 a.m. at Farmer & Son Funeral Home in Geneva, Nebraska with Pastor Daniel Evertson presiding. There was one song for Margaretha&#8217;s service, &#8220;Save A... View Obituary & Service Information

The family of Margaretha A. Holland created this Life Tributes page to make it easy to share your memories.

A Memorial Service for Margaretha was held on Friday, September...

Send flowers to the Holland family.