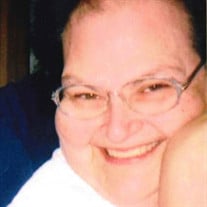 A Memorial Service for Marge will be held on Thursday, April 8, 2021 at 10:30 a.m. at Farmer & Son Funeral Home in Geneva, Nebraska with Pastor Bill Richards presiding. ***Casual dress is requested by the family*** No Visitation - Cremation. Graveside Services will be conducted following the Memorial Service at the Fairmont Public Cemetery in Fairmont, Nebraska. Memorials are to be directed to the family to be designated at a later date. Marge Jo Marget was born to Buster Marget and Martha (Drommond) Marget on May 19, 1949 at Geneva, Nebraska, and passed away on April 3, 2021, at Tabitha Health in Lincoln, Nebraska, at the age of 71. She was one of 6 children in the family. Marge lived her whole life in Fillmore County. She attended school at Fairmont High School and graduated with the class of 1967. She always had a job and worked diligently at the Sun Set Nursing Home in Geneva, Mr. R’s, West Side Café, Dairy Delight, Phil-Mart and owned and operated the Geneva Bakery where she handmade Daylight Donuts daily. She was on the board at the Ulmer Foster Home for children and made many friendships being a part of this organization. Marge raised her daughter as a single mother. She loved houseplants, knitting, crocheting and embroidery work. She made multiple lap blankets for her church. Leaving behind to attend services and to celebrate her life are daughter, Megan Marget; grandson, Mason Marget; mother, Martha Marget; brothers, James (Annette) Marget and their family, Don (Jessie) Marget and their family, Jerry (Rachel) Marget; sister, Linda (John) Hughes and their family; sister-in-laws, Cheryl Marget and Wanda Marget; aunt and uncle, Norma and Richard Christian; aunt, Mildred Teaney and cousins and many acquaintances and friends. She is preceded in death by her father, Buster Marget; brother, Bill Marget and brother-in-law, John Hughes. She will be remembered and sadly missed.

A Memorial Service for Marge will be held on Thursday, April 8, 2021 at 10:30 a.m. at Farmer & Son Funeral Home in Geneva, Nebraska with Pastor Bill Richards presiding. ***Casual dress is requested by the family*** No Visitation - Cremation. Graveside... View Obituary & Service Information

The family of Marge J. Marget created this Life Tributes page to make it easy to share your memories.

A Memorial Service for Marge will be held on Thursday, April...

Send flowers to the Marget family.