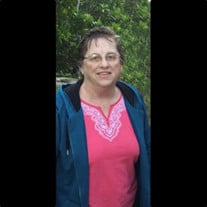 Marie Ellen (Heinrichs) Krueger was born on August 23, 1941, to Ervin Johan George Heinrichs and Roma Mae (Fesler) Heinrichs at home in Geneva, Nebraska. She passed away on August 26, 2020, at her home in Davenport, Nebraska at the age of 79 years, 3 days. Marie attended and was confirmed in 1958 at Trinity Lutheran Church in Bruning, Nebraska. Her primary education was in Carleton, Strang, and a rural school near her home, graduating from Shickley High School in 1960. After high school Marie worked as a telephone operator in Superior, Nebraska. During that time she met Larry Krueger on a blind date and married him on September 16, 1961, in Davenport, Nebraska. To this union three children were born: Anita, Leroy, and Ellen. During the early years of their marriage, Larry worked for the C&NW Railroad taking them to many small towns in Nebraska. Later they relocated to Kewaskem, Wisconsin, before finally settling in Davenport, Nebraska for the past 49 years. Marie held various odd jobs as she and Larry moved around the state. Once settling in Davenport, she worked for 23 years in the Deshler Broom Factory as a finisher and later on as co-manager, until its closing in 1996. Over the years she was involved in many different crafting projects; but for the last 20+ years she devoted her spare time to card making. At one time having her cards published in a national magazine. She enjoyed sending cards to all of her extended family and friends, too numerous to count. All through her life she found joy in animals and had many pets. Preceding her in death were her parents, Ervin and Roma Heinrichs, and her daughter Anita Krueger. Her survivors include her husband Larry of Davenport, son Leroy Krueger of North Port, Florida, daughter Ellen (Robert) Stwalley of La Porte City, Iowa, two grandchildren Tabitha Stwalley of Centerville, Iowa, and Hunter Stwalley of La Porte City, Iowa, two brothers Ervin (LaDonna) Heinrichs Jr. of Exira, Iowa, and Timothy (Vicky) Heinrichs of Marietta, Georgia, as well as numerous nieces, nephews and friends. A private family Funeral Service for Marie was held on Monday, August 31, 2020 at 10:00 a.m. at Farmer & Son Funeral Home in Geneva. Alan Olsen officiated the Funeral Service. Chris Olsen sang “Abide With Me” and “How Great Thou Art” for the service. Pallbearers included Hunter Stwalley, Dan Heinrichs, Travis Heinrichs, Alan Olsen, Kent Olsen, and Chris Olsen. Interment was held in the Davenport City Cemetery following the Funeral Service. Farmer & Son Funeral Home was in care of the arrangements and online condolences can be left at www.farmerandsonfuneralhome.com Memorials are suggested to the family for future designation.

Marie Ellen (Heinrichs) Krueger was born on August 23, 1941, to Ervin Johan George Heinrichs and Roma Mae (Fesler) Heinrichs at home in Geneva, Nebraska. She passed away on August 26, 2020, at her home in Davenport, Nebraska at the age of 79... View Obituary & Service Information

The family of Marie E. Krueger created this Life Tributes page to make it easy to share your memories.

Send flowers to the Krueger family.