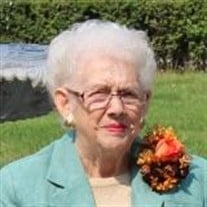 A Funeral Service for Marilyn will be held on Wednesday, April 4, 2018 at 10:00 a.m. at the First Congregational United Church of Christ in Geneva, Nebraska with Pastor Stuart Davis officiating. Visitation will be held on Tuesday, April 3, 2018 from 1:00 p.m. until 8:00 p.m. with family present from 5:00 p.m. until 7:00 p.m. at Farmer & Son Funeral Home in Geneva, Nebraska. Graveside Services will be held at Geneva Public Cemetery following the funeral service. Memorials are to be directed to the family for a later designation. Marilyn Louise (Lynn) Christiancy was born to Bert A. and Marguerite (Limback) Lynn on September 11, 1927 at Geneva, NE. She left this earthly world on a snowy Easter Sunday, April 1, 2018 surrounded by her family. She was one of three children. Marilyn lived her entire life in Fillmore County. She graduated from Geneva High School in 1945. On September 12, 1948, she married her high school sweetheart, Clair Christiancy, Jr. Marilyn made the adjustment from being a “city girl” to living on a rural farmstead with no modern conveniences. Clair and Marilyn were the parents of four children: Karen, Diane, JoAnn, and Clair III. Marilyn had many occupations over the years. After graduation, she worked at JC Penney. After her marriage and birth of her children, she worked part-time at the ASCS Office and the courthouse where her father was the Fillmore County Treasurer. After her father’s retirement in 1962, she continued to work in the county treasurer’s office for the next eight years. She was elected Fillmore County Treasurer in 1970 and served the residents of Fillmore County until her retirement in 1999. Marilyn always enjoyed being busy. She sewed and knitted many clothes for her three daughters. When the girls were young, she made them matching outfits for Easter. When they were older, she switched to prom, bridesmaid, and wedding dresses. Clair and Marilyn were also busy attending family activities and community events. In 1989, Clair retired from farming and they moved to Geneva. After Clair’s death on February 23, 1990, Marilyn immersed herself in the activities of her growing family, work at the Courthouse, and volunteering at church and various organizations. If she saw a need, she was eager to gather other volunteers to help. With the assistance of many dedicated people, she helped raise funds for the restoration of the courthouse, spent countless hours compiling a history of Geneva’s main street businesses, and was instrumental in organizing the local Neighborhood Watch and Crime Stoppers. She was on the YRTC and CASA advisory boards to name a few. Through all of her contributions, Marilyn left her mark on the community of Geneva and Fillmore County. Marilyn was preceded in death by her parents, husband Clair Jr, brother Bert Lynn, and sister Betty Clark. She is survived by her four children, Karen (Bob) Kohler of Milligan, Diane (Larry) Heath of Geneva, JoAnn (Dan) Vavra of Friend, and Clair III (Lesa) Christiancy of Lincoln. She is also survived by her 9 grandchildren: Amanda (Troy) Filipi, Chris Kohler, Doug Heath, Lyndsey (Shawn) Kottas, Kelly (Brett) Burenheide, Corey (Natasha) Vavra, Parker Schoen, Cooper Christiancy, & Caelyn Christiancy. Her surviving 8 great-grandchildren are: Dylan & Cade Filipi; Carter, Dawson & Easton Burenheide; Brogan, Ainslee, & Ayla Vavra.

A Funeral Service for Marilyn will be held on Wednesday, April 4, 2018 at 10:00 a.m. at the First Congregational United Church of Christ in Geneva, Nebraska with Pastor Stuart Davis officiating. Visitation will be held on Tuesday, April 3,... View Obituary & Service Information

The family of Marilyn L. Christiancy created this Life Tributes page to make it easy to share your memories.

A Funeral Service for Marilyn will be held on Wednesday, April...

Send flowers to the Christiancy family.