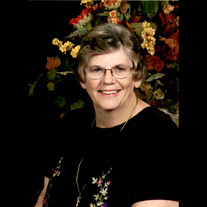 Marilyn Deanna Nichols was born to Kenneth G. Moore and L. Arlene Nickerson on May 21, 1937 in Belleville, KS and passed away July 13, 2017 in Brookestone Village nursing home in Omaha, NE at the age of 80. Marilyn was the older sister of Sharron and Linda. Marilyn grew up and lived most of her life in Fillmore County, Nebraska. She earned a B.A. in Teaching from Doane College in 1969 and then taught in the Geneva, Fairmont and Grafton school districts. Kindergarten was her favorite but she taught 1st, 7th and 8th grades too. Marilyn retired from teaching and began a 2nd career as a bookkeeper. She assisted with the bookkeeping at Green Country in Geneva for decades until her final retirement. She married the love of her life and best friend, Marvin Dean Nichols of Fairmont, NE on July 19, 1959. They had three children: Beth, Scott, and Todd. To Marilyn, family came first. She would eagerly volunteer to watch her grandchildren and was a helpful motherly presence whenever it was necessary. Until her health declined significantly, Marilyn was a fixture at all sports, music, dance, and art activities of her children and grandchildren. Marilyn enjoyed all forms of music. She loved hymns, musical theater, jazz, Elvis, and classical music. You could find Marilyn playing the piano at her home in Geneva, Lakeside Retirement Home, and Brookestone Village. In fact, her passion for music stayed with her until her dying day. She loved to play all types of games with both adults and children. Her family fondly remembers games of Clue, Liverpool Rummy, and Trivial Pursuit that would go well into the night. Bridge was another of Marilyn’s passions. She belonged to several bridge clubs and this number increased significantly once she retired. If Marilyn couldn’t attend a family sporting event, she would have sports on the TV. She loved baseball, Kansas basketball, Nebraska football, and tennis to name a few and was not afraid to express her views about teams and players. Marilyn was a voracious reader and longtime board member of the Geneva Public Library where she ensured that others would have the opportunity to learn to appreciate and love books and reading as much as she did. As a long term member of The Geneva United Methodist Church, Marilyn served at every lay position in the church. She taught Sunday school, Vacation Bible School and was a regular at the Sunday morning early service until she moved to Lincoln. Marilyn found great comfort, friendships and peace through the church and her faith. Marilyn was a long time and active member of PEO, Chapter O in Geneva where she held every office in the chapter. She looked forward to the meetings and the interactions with the other members. She enjoyed traveling and saw nearly all of the United States and nearly every continent, some more than once. She traveled with the Geneva State Bank Ambassador Club many times and enjoyed the trips with family and friends to see and learn about new people and places. Her house was filled with pictures and mementos of her travels. Sometimes, she would be planning the next trip before she finished a trip. Marilyn is preceded in death by her parents and her husband, Marvin. She is survived by her sisters: Sharron Arbuck and husband, Bernard Arbuck of McCool Junction, NE; Linda Adams of Lincoln, NE, her three children: Beth Nichols of Littleton, CO; Scott Nichols of Lincoln, NE and Todd Nichols and his wife Lindsay Nichols of Omaha, NE; and her four grandchildren: Baylee and Noah Nichols of Lincoln, NE and Avery and Layne Nichols of Omaha, NE. A Memorial Service for Marilyn was held on Tuesday, July 18, 2017, at 10:30 a.m. at the United Methodist Church in Geneva. Pastor Michelle Gowin officiated the service. Sondra Myers accompanied the congregation in the singing of “I Have Decided To Follow Jesus” and “Amazing Grace.” A Committal of Ashes was held in the Geneva Public Cemetery following the Memorial service. Farmer & Son Funeral Home conducted the services. Online condolences may be left at www.farmerandsonfuneralhome.com. Memorials are suggested to the Alzheimer’s Association, 225 N. Michigan Ave., Fl. 17, Chicago, IL 60601.

Marilyn Deanna Nichols was born to Kenneth G. Moore and L. Arlene Nickerson on May 21, 1937 in Belleville, KS and passed away July 13, 2017 in Brookestone Village nursing home in Omaha, NE at the age of 80. Marilyn was the older sister of Sharron... View Obituary & Service Information

The family of Marilyn D. Nichols created this Life Tributes page to make it easy to share your memories.