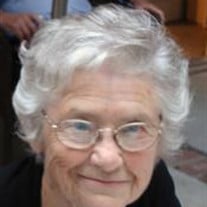 Services for Marjorie will be held on Wednesday, December 28, 2011 at 10:30 a.m. at the United Methodist Church in Geneva with Kim Dunker officiating. Visitation will be Tuesday from 1:00 p.m. to 8:00 p.m. at the Farmer & Son Funeral Home in Geneva. Memorials are directed to the Fillmore County Hospital Foundation or the Geneva Senior Center. Marjorie Lucille Lovegrove Burt, 80, passed away peacefully on December 24, 2011 after a courageous battle with ovarian cancer. All of the family members were together finishing Christmas Eve dinner when they learned of her death. Born on February 25, 1931, to Alice Mae (Ainsworth) and George Edward Lovegrove, Marjorie was the youngest of four children, growing up on the family farm northwest of Geneva, Nebraska. She attended district 14 country grade school, graduated from Geneva High School in 1948 and went on to attend the Lincoln School of Commerce. She worked for a brief time at an insurance company in Lincoln. On December 4, 1949, Marjorie and Keith Remy Burt married. They began their life together outside of Harvard, Nebraska, where Keith farmed the air base and they started their family. In 1960 Marjorie, Keith and family moved to the Burt homestead south of Grafton; just two and one half miles from where Marjorie was raised. At the same time they purchased a farm implement business in Geneva, which they have operated for over 50 years. Marjorie participated in all the family businesses as a partner in decision-making. Marjorie and Keith enjoyed travel and were fortunate to see many parts of the United States and several European countries. Marjorie was a member of the Geneva United Methodist Church, the Daughters of the American Revolution and the Mayflower Society. She had a passion for genealogical work, performing research and visiting numerous sites in the United States and England to trace both her and Keith’s family lineage. Marjorie was a devoted wife and mother. She took great care in creating a warm, comfortable and elegant home and garden. Marjorie is survived by her husband of 62 years, Keith Remy Burt. She is also survived by her four children and two grandchildren; a daughter and son-in-law, Linda Burt and John Rebrovic, Omaha, NE; daughter and son-in-law Beverly and Clark Epke, Lincoln, NE; son, John K. Burt, Grafton, NE; and daughter and son-in-law Janet and Kim Eggers, Superior, NE; and two grand children Effie Epke Nestrud, Marlborough, MA and Bryan Eggers, Lincoln, NE. Sister and brother-in-law Lila and Robert Bettger, Fairmont, NE; brother and sister-in-law Robert Dean and Shirley Lovegrove, Fairmont, NE; and sister-in-law Jean Lovegrove, Fairmont, NE also survive her. In addition to her parents, one brother, Dale Lovegrove and a grandson, Zak Epke, preceded her in death.

Services for Marjorie will be held on Wednesday, December 28, 2011 at 10:30 a.m. at the United Methodist Church in Geneva with Kim Dunker officiating. Visitation will be Tuesday from 1:00 p.m. to 8:00 p.m. at the Farmer & Son Funeral Home in... View Obituary & Service Information

The family of Marjorie L. Burt created this Life Tributes page to make it easy to share your memories.

Services for Marjorie will be held on Wednesday, December 28,...

Send flowers to the Burt family.