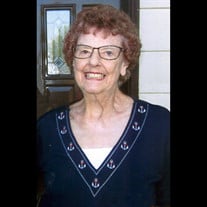 Marjorie Jeanne Dowdy was born in Geneva, Nebraska on April 9, 1935 to Charles and Nora (Miller) Heath. She passed away on September 24, 2018 at the age of 83 years, 5 months, and 15 days from injuries sustained in a tragic car accident near Shickley, Nebraska. She was the younger of two children. She grew up on a farm west of Geneva. Marj was a 1953 graduate of Geneva High School and attended Nebraska Wesleyan for two years. Marj met Max through her brother, Lowell when Max and Lowell were drafted into the army. Marj and Max were married on August 21, 1955. They lived near Carleton, NE for 50 years and were blessed with two sons, Stan and Doug Dowdy. Marj loved her husband, children, grandkids and great-grandkids. There was always some sort of fresh cookies or food around for them and she was always ready for a visit from family and friends. She was always present in her family’s lives and rarely missed an activity. She was an active member of the Bethel Church of the Brethren and played the piano there for over 60 years.. Marj also taught piano for over 60 years to many generations of children in the local area. She was a wonderful housewife and worked at Parkview Nursing Home in Deshler for over 30 years. She loved going to the Shickley School to read with the elementary students, and visit her little friends in both daycares. Marj and the kids found so much joy in each other, and they called her Grandma Marj. Marj was guided by her faith in Jesus Christ. Her faith carried her through life in all its ups and downs. She served the Lord faithfully through her kindness and love for her family and friends. She will be deeply missed by all that knew her. Marj was preceded in death by her parents, Charles and Nora; daughter-in-law, Kelly Dowdy; and brother, Lowell Heath. Marj is survived by her husband of 63 years, Max of Shickley, Nebraska; her children, Stan Dowdy and his wife Andrea and their children, Luke and Brock of Denver, Colorado; Doug Dowdy of Carleton, Nebraska and his children, Jordan Dowdy and his wife April and their children, Madelynne and Samuel of Lincoln, Nebraska, Justin and his wife Jillian and their children Jackson and Jamie of Gothenburg, Nebraska, and Jessica Schoenholz and her husband Alex and their children Garrett and Shaun of Bruning, Nebraska; sister-in-law Jo Ann Heath of Geneva, Nebraska; brothers-in-law and sisters-in law Don Dowdy and wife Marla of Carleton, Nebraska, Dale Dowdy and wife, Christy of Virginia, and John Dowdy and wife, Doris of Hawaii; and nieces, nephews, and friends. A Funeral Service for Marj was held on Friday, September 28, 2018 at 10:30 a.m. at Bethel Church of the Brethren, rural Carleton, Nebraska. Pastor Mike Row officiated the service. Sara Arens accompanied the congregation in the singing of “His Eye Is On The Sparrow” and “Great Is Thy Faithfulness.” She also played an instrumental version of “How Great Thou Art.” Pallbearers for the service included Jordan Dowdy, Justin Dowdy, Alex Schoenholz, Luke Dowdy, Brock Dowdy, Brad Dowdy, and Steve Heath. Interment was held in the Bethel Cemetery following the Funeral Service. Farmer & Son Funeral Home of Geneva was in care of the arrangements and online condolences can be left at www.farmerandsonfuneralhome.com Memorials are suggested to the family for future designation.

Marjorie Jeanne Dowdy was born in Geneva, Nebraska on April 9, 1935 to Charles and Nora (Miller) Heath. She passed away on September 24, 2018 at the age of 83 years, 5 months, and 15 days from injuries sustained in a tragic car accident near... View Obituary & Service Information

The family of Marjorie J. "Marj" Dowdy created this Life Tributes page to make it easy to share your memories.

Marjorie Jeanne Dowdy was born in Geneva, Nebraska on April 9,...