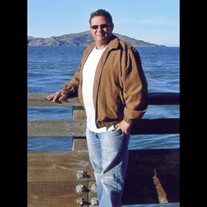 Mark James Crawford was born on February 17, 1965 in Friend, Nebraska to Janet (Ricenbaw) and Ronald D. Crawford. He passed away suddenly on Saturday, August 24, 2019, at his home in Exeter at the age of 54 years, 6 months and 7 days. Mark was welcomed at their farm home east of Cordova by two older siblings, Lori and Dean. Sadly, later that Fall of 1965, their father was killed in a tragic car accident. Janet moved her family to Friend and in 1967, married Joel Pospisil. They began a new family and added brothers, John and Alan. Mark was affectionately known by many as “Bert.” Most people don’t know that he gained this nickname by resembling the 1970’s cartoon, Fat Albert. While in High School, Mark enjoyed football, wrestling and making life long friends. He graduated in 1983 from Friend High School. On November 9, 1982, Mark became a father to Dustin James. After high school, Mark worked close to home for his Dad at Friend Fertilizer. In September of 1987, he decided to enlist into The United States Army and serve his country. Dustin was so proud of his Dad while he endured Mark’s deployment to Iraq during Operation Desert Storm. After four years in the Army, he was honorably discharged in 1991. He took a job in Alabama then in 1996, he decided to move home to Friend and start farming with his Dad. On June 17, 2000, he was united in marriage to Elizabeth (Beth) Loukota and gained two daughters, Ashley and Whitney. As a new family, Mark, Beth, Dustin, Ashley and Whitney resided on a farm outside of Milligan. Mark and Beth later moved to Exeter. They enjoyed traveling, long weekends in Omaha, baseball games, Husker football and trips to the Casino. Mark loved to play Black Jack. He never met a stranger, even at the table. Mark loved meeting and talking to new people. Mark was a very proud “Grampy” to seven grandchildren and was looking forward to welcoming the eighth early next year. He loved kids and spoiled them every chance he could. Mark embarked on a new journey in early 2018 and started his own trucking company. He was enjoying his work and took great pride in his semi. He was preceded in death by his sister Lori Brandt; father, Ronald D, Crawford; father-in-law James “Doc” Loukota; grandparents, Ralph and Winnie Crawford, James and Dorothy Ricenbaw, and Lewis “Tobe” and Ann Pospisil; and an infant nephew, Mark Rodney Crawford. Mark will be missed by many including his wife, Beth Crawford, Exeter; children and spouses, Dustin and Megan Crawford, Exeter, Ashley and Clint Foutch, Friend, Whitney and Tommy Zweifel, Gretna; Grandchildren, Emmett, Evan, Emsley, and Everett Crawford, Addison and Cora Foutch, Ryan Zweifel; Parents, Joel and Janet Pospisil, Friend; Mother-in-law Agnes Loukota, Exeter; Brothers and sisters-in-law, Dean and Judy Crawford, Friend, John Pospisil and Bonnie Galusha, Friend, Alan and Sherri Pospisil, Geneva; and many aunts, uncles, nieces, nephews and a host of other relatives and friends. “If a rooster lays an egg on top of a barn, which way will the egg roll?” A Memorial Service for Mark was held on Friday, August 30, 2019 at 10:30 a.m. at the Milligan Auditorium in Milligan, Nebraska. Kim Dunker officiated the service. The recorded selections “The Song Remembers When,” “I Wouldn’t Have Missed It For the World,” and “When I Get Where I’m Going” were played during the service. Honorary Pallbearers for the service included Matt Harre, Mark Benorden, Gary Noble, John Weber, Norman Brandt, Adam Chrans, Paul St. Louis, John Graham, and Lane Strate. Interment with Military Honors was held in the Exeter Cemetery following the Memorial Service. Military Honors were provided by William Sullivan Exeter American Legion Post 218. Farmer & Son Funeral Home was in care of the arrangements and online condolences can be left at www.farmerandsonfuneralhome.com Memorials are suggested to the family for future designation.

Mark James Crawford was born on February 17, 1965 in Friend, Nebraska to Janet (Ricenbaw) and Ronald D. Crawford. He passed away suddenly on Saturday, August 24, 2019, at his home in Exeter at the age of 54 years, 6 months and 7 days. Mark... View Obituary & Service Information

The family of Mark J. Crawford created this Life Tributes page to make it easy to share your memories.

Send flowers to the Crawford family.