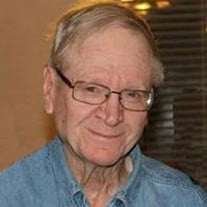 Martin F. Saatmann was born to Fredrick Saatmann and Kathryn Ida (Schommer) Saatmann on July 26 1939 at The Geneva General Hospital, in Geneva Nebraska and passed away June 21 2014 at Exeter Care Center in Exeter Nebraska at the age of 74 years, 10 months, 26 days. He was one of 2 children in the family. Martin attended a one room school house a couple miles from his home. He graduated from Ohiowa Public School in 1957. After graduation Martin was drafted into the army and served in Germany from April 16, 1963 to April 2, a1965. After returning home Martin continued to farm with his father. Martin married Kay L. (Hendricksen) Saatmann of Filley, Nebraska on June 24, 1977 and to them two sons where born, Josh F. Saatmann and Tyler V. Saatmann. Martin was baptized in the St Wencelaus Church in Milligan, Nebraska on June 23, 1940. He was confirmed on April 19, 1958 in the same church. Martin spent his whole life on the family farm north of Ohiowa, NE. He farmed with his father and eventually took over the farm then retired in 2006 and let his son Josh take over, although, he still gave his two cents about everything done on the farm. Martin loved to take care of his cattle (black angus). Martin loved to go hunting out in Chadron, Nebraska with family. He could always tell a good hunting story. Martin was a member of the American Legion post 0193 in Ohiowa, NE. He was also a member of the VFW in Geneva, NE and a member of the Catholic Church. Martin and Kay loved to go out and see the mountains. Martin was very proud of his 2 sons but might have been prouder of his 2 grandchildren Alexis and Braxton. Martin loved to get down on the floor and play farm with the kids. Martin was preceded in death by his parents Fredrick Saatmann and Kathryn (Schommer) Saatmann of Ohiowa NE. Nephew Gregg Saatmann, of Iowa. He is survived by his wife, Kay L. (Hendricksen) Saatmann of Ohiowa NE. His son Josh F Saatmann, wife, Margo and children Alexis and Braxton of Milligan, NE. His son, Tyler V. Saatmann of Grand Island NE and girlfriend, Michaela Berke, and his, brother Gene Saatmann of Forest City, Iowa. Funeral services where conducted from St Wencelaus Church in Milligan NE on Wednesday, June 25, with Father Chris Goodwin officating, Judy Rady accompanied the congregation who sang Amazing Grace and How Great Thou Art. Recorded selections for the service were The Old Rugged Cross and In The Garden. Pallbearers were John Jannsen, Randy Schommer, Jason Kotas, Larry Nun, David Lynch and Doug Meyer. Interment was in Ohiowa Cemetery with Military Honors provided by the Ohiowa American Legion Franklin Post 193. Farmer and Son funeral Home was in charge of arrangements. Memorials are directed to Ohiowa Rescue Unit.

Martin F. Saatmann was born to Fredrick Saatmann and Kathryn Ida (Schommer) Saatmann on July 26 1939 at The Geneva General Hospital, in Geneva Nebraska and passed away June 21 2014 at Exeter Care Center in Exeter Nebraska at the age of 74 years,... View Obituary & Service Information

The family of Martin F Saatmann created this Life Tributes page to make it easy to share your memories.

Martin F. Saatmann was born to Fredrick Saatmann and Kathryn...

Send flowers to the Saatmann family.