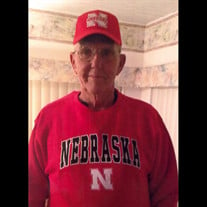 Marvin Allen Roper was born in his family home in rural Fairmont on March 20,1939, to Curtis and Alta Roper. Marvin passed away in Mesa, Arizona on January 22, 2017 at the age of 77 years, 10 months, and 2 days. Marvin is survived by his brother Delvin, and preceded in death by his brother Duane (Buck). Marvin grew up in Fairmont and graduated from high school in 1956. While in high school he participated in football, basketball, and track. Marvin was honorably discharged from the US Army on a hardship in April of 1963, due to the passing of his father. In September of 1963 Marvin married the love of his life Delores Oliva and the couple had 2 children Tammy and Gary. Marvin's passion was farming; it was what the Good Lord called him to do. He was still planning on farming this spring and had bought equipment to make sure he could still plant and harvest. He was a DeKalb dealer for over 40 years, served on the Fairmont School Board for 8 years, was a founding member of the Fairmont Lions Club, and a member of the Community Church of Fairmont for 68 years, where he sang in the choir. He also served on the Co-op Board for 2 terms, the Fillmore County Development Board and was honored by the Exeter Feeders and Breeders in 1997. Marvin and Delores enjoyed traveling to Hawaii, California, Texas, Florida, Arizona, Iowa, and Alaska. Marvin and Delores bought a home in Mesa, AZ in 1996 where they escaped the Nebraska winters. He always called Mesa "being in Paradise". Marvin and Delores developed many close friends from all over the Midwest and Canada. They spent time playing shuffleboard, golfing, playing cards, traveling around Phoenix, and especially trips to "Tortilla Flats". Marvin loved to eat, especially chicken, and ice cream, and of course, all foods go with the only beverage "coffee". Presently the Roper family consists of Delores, daughter Tammy and husband Dick Kohler from Lincoln, son Gary and wife Cheryl from Fairmont, 6 grandchildren, and 14 great grandchildren. Marvin never knew a stranger, and all meals or a cup of coffee ended with a conversation with someone in the restaurant. It normally took 5-10 minutes before the gathering became "old friends". Marvin always said, " You should live each day to its fullest"! A funeral service for Marv was held on Monday, January 30, 2017 at 10:30 a.m. at the Fairmont Community Church with Pastor Brad Barrows and Rev. Del Roper officiating. Nancy Jo Galusha accompanied the Church Choir in the singing of “Fill My Cup, Lord” and “His Eye Is On The Sparrow.” Pallbearers included Marcus Roper, Rob Roper, Greg Oliva, Melvin Oliva, Luke Meyer, and Drew Terrel. Honorary pallbearers included Richard Janing, Jerry Galusha, Robert Galusha, Paul Bettger, Scott Oliva, Dennis Oliva, Mark Oliva, Howard Lefler, Gene Nichols and Ron Isley. Military Interment was held in the Fairmont Cemetery following the funeral with Military Rites performed by Fairmont American Legion Lt. Forbes Post 21. Farmer & Son Funeral Home of Geneva conducted the services. Online condolences may be left at www.farmerandsonfuneralhome.com. Memorials can be directed to the Fairmont Community Church or the Fairmont Community Club.

Marvin Allen Roper was born in his family home in rural Fairmont on March 20,1939, to Curtis and Alta Roper. Marvin passed away in Mesa, Arizona on January 22, 2017 at the age of 77 years, 10 months, and 2 days. Marvin is survived by his... View Obituary & Service Information

The family of Marvin A. Roper created this Life Tributes page to make it easy to share your memories.

Marvin Allen Roper was born in his family home in rural Fairmont...