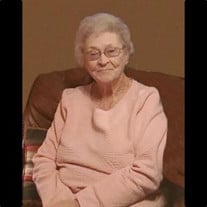 Mary “Meldene” Howard Asbill was born to Richard Dean Howard and Juanita Ruth Smith on August 4, 1935 at Pine Bluff, Arkansas and passed away on July 21, 2021 at her home in Geneva, NE at the age of 85 years. She was one of two children born to their mother. Meldene’s father passed away one month before her birth, and her mother passed away when Meldene was nine years old. Thankfully, Meldene was blessed with a Godly grandmother, Maude May Smith, who raised her after the passing of her parents. The Lord blessed Meldene with an ‘aunt’ who was more like a sister to her during her upbringing. Her name was Thelma Smith Bland. Meldene lived most of her life in and near Sallisaw, OK. She graduated from Sallisaw High School. Meldene met her beloved, Ross Asbill, in December of 1954 at a malt shop in Sallisaw. It must have been love at first sight, because they were married soon after on June 17, 1955 at the home of Reverend Jim Pickup. To this union two daughters were born; Mary Ruth and Catherine Marie. Ross and Meldene enjoyed each other’s company so much that they even worked together throughout many of their working years at the local cable tv office in Sallisaw. Meldene and Ross were blessed to live in Sallisaw as their daughter, Mary’s, children were small. They attended activities and loved being around their grandkids as much as they could. Meldene and Ross both loved the Lord Jesus Christ and were faithful members of their baptist church throughout their lives. After Ross’ death, Meldene moved to live with her daughter, Mary for a time. A few years later, Meldene moved to Geneva and faithfully attended the Evangelical Free Church. It wasn’t a Baptist church, but it was the next best thing! She often said it was difficult to understand the pastor because of his accent, but it might’ve had more to do with her hearing and some would argue that she’s the one who had the accent. During her time at the EFC, she made many dear friends and often said how thankful she was for them. Life in Nebraska was much different than in Oklahoma, but Meldene was always positive (positively didn’t like the snow and cold) and willing to try and do new things. She enjoyed attending family gatherings and especially loved going to as many of her great-grandchildren’s activities as she possibly could. Meldene was preceded in death by her husband Ross Asbill; grandmother Maude Smith; parents Richard & Juanita (Smith) Howard; and her sister/aunt Thelma Bland. She is survived by her daughter Mary Ruth Davis and husband Bill of Owasso, Oklahoma and Catherine Marie Kimbrough and her husband Roger of Geneva, NE; grandchildren Jennifer Robertson (Steven) of Bixby, OK, Shaun Keith of Owasso, OK, Justin Holman of Owasso, OK, Shane Kimbrough (Kelley) of Seward, NE, Heather Probasco(Todd) of Fairmont, NE, Kyle Kimbrough (Lacy) of Geneva, NE; great-grandchildren Brooke Weaver (Daniel) of Bixby, OK, Haley Kimbrough, Jacob Kimbrough, & Carley Kimbrough of Seward, NE, Grace Probasco, Tripp Probasco, & Daniel Probasco of Fairmont, NE,, Lane Kimbrough and Larsyn Kimbrough of Geneva, NE,,Phoenyx Holman and Charley Holman of Owasso, OK; great- great-grandaughter Lochlyn Weaver of Bixby, OK; and sister Allene Fields of Sallisaw, OK. A Funeral Service for Meldene was held on Tuesday, July 27, 2021 at 10:30 a.m. at the Evangelical Free Church in Geneva. Pastor Jason Briggs officiated the Funeral Service. Kelley Kimbrough accompanied the congregation in the singing of "Amazing Grace(My Chains Are Gone)" and "I'll Fly Away." She also accompanied Shane & Haley Kimbrough in the singing of "Turn Your Eyes Upon Jesus." Pallbearers for the service included Shane Kimbrough, Kyle Kimbrough, Todd Probasco, Jacob Kimbrough, Shaun Keith, Justin Holman, Steven Robertson, and Daniel Weaver. Honorary pallbearers included Meldene's grandkids, great grandkids and great great grandchild. A Graveside Service took place on Wednesday, July 28, 2021 at 1:00 p.m. at the Sallisaw Cemetery in Sallisaw, Oklahoma. Memorials are suggested to the family for future designation.

The family of Mary "Meldene" Asbill created this Life Tributes page to make it easy to share your memories.

Send flowers to the Asbill family.