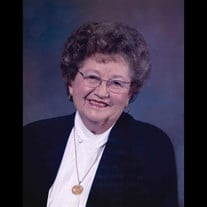 Mary Beth (Reiss) Bruning was born on a farm near Belvidere, Nebraska on April 14, 1929 to Paul and Amy (Babka) Reiss. Midwife Mary Spickelmier was set to do the delivery, but since Mary was breach, Dr. Bancroft was summoned from Hebron to bring... View Obituary & Service Information

The family of Mary B. Bruning created this Life Tributes page to make it easy to share your memories.

Mary Beth (Reiss) Bruning was born on a farm near Belvidere,...