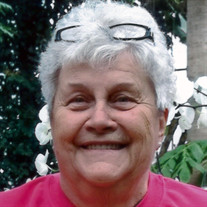 A Memorial Service for Mary was held on Thursday, November 21, 2019 at 10:30 a.m., at the United Methodist Church in Geneva, Nebraska with Pastor Doug Griger and Kim Dunker presiding. There were 3-recorded songs played during the service, “Softly And Tenderly” by Alan Jackson, “In The Garden” by Alan Jackson and “Sissy’s Song” by Alan Jackson. Urn Bearers were Nicholas Dahlstrom, Jill Chaney, Kelsey Chaney, Austin Chaney, Paige Harre, Cody Chaney, Rae Chapman, Kylie Dahlstrom, Emily Dahlstrom and Ashly Dahlstrom. Burial Of Ashes was held following the memorial service at the Geneva Public Cemetery. Memorials were directed to the family to be designated at a later date. Farmer & Son Funeral Home was in charge of funeral arrangements. Mary Barbara Chaney was born to Madonna Mary Jenn on March 20, 1941 in New Hampton, Iowa. She passed away November 14, 2019 at Nebraska Heart Institute in Lincoln, Nebraska at the age of 78. Mary is 1 of 3 children in the family. She grew up in the small town of Ionia, Iowa. She always told the story of walking home from school at the age of 7, during a tornado. Her parents always said “walk straight home from school and do not stop for anything”. She graduated from St. Boniface Catholic High School. Mary married Dennis D. Dahlstrom and to this union 4 children were born, Nancy Ann, David Gene, Sharon Marie and Duane Michael. She lived in several towns in Iowa including Waterloo, Washburn, Hudson and Cedar Falls. During one of her many visits to Geneva, Nebraska, to visit her friend Lois Naimon, she was introduced to Richard A Chaney. She moved to Geneva and they were married a short time later. She had several jobs over the years, Jack and Jill Grocery Store, YRTC and Geneva Floral. Wherever she worked, she always greeted everyone with a smile. She loved working with people and made many friends along the way. Many of her longtime friends she made through her love of penpalling. She loved sharing stories, and recipes and always looked forward to pen pal picnics where she met many of her pen pal friends. They would spend the entire weekend laughing, telling stories and enjoying good food. She has made many quilts and crocheted many afghans over the years and shared them with family and friends. She shared her love of crocheting at the YRTC, where she taught many of the girls how to crochet. If she wasn’t working on a quilt or afghan, you could find her making cards and rubber-stamping. She was a member of the Geneva Methodist Church. Mary enjoyed her time with the Naomi Circle and serving on a monthly service group. She is preceded in death by her parents, Leon C. and Madonna M.Testroet, sister, Suzanne R. Testroet and her husband, Richard A Chaney. Survived by her daughter, Nancy Chaney and friend, Paul O’Brien of Geneva, NE, son, David Dahlstrom of Deshler, NE, daughter, Sharon Chapman and husband, LeRoy of Geneva, NE, son, Duane Dahlstrom and wife, Jamie of Byron, IL, brother, Michael Testroet and wife, Sueanne of Cedar Falls, IA, grandchildren, Nicholas Dahlstrom and wife, Kendall Geneva, NE, Jill Chaney of Lincoln, NE, Kelsey Chaney of Lincoln, NE, Austin Chaney of Axtell, NE, Paige Harre and husband, Logan of Exeter, NE, Cody Chaney of Grafton, NE, Rae Chapman of Geneva, NE, Kylie Dahlstrom, Emily Dahlstrom and Ashly Dahlstrom of Byron, IL, great-granddaughters, Tinley Dahlstrom of Geneva, NE and Kollin Harre of Exeter, NE, nephews, Shane Testroet and family of Greene, IA and Martin Testroet and family of Cedar Falls, IA.

A Memorial Service for Mary was held on Thursday, November 21, 2019 at 10:30 a.m., at the United Methodist Church in Geneva, Nebraska with Pastor Doug Griger and Kim Dunker presiding. There were 3-recorded songs played during the service,... View Obituary & Service Information

The family of Mary B. Chaney created this Life Tributes page to make it easy to share your memories.

A Memorial Service for Mary was held on Thursday, November 21,...