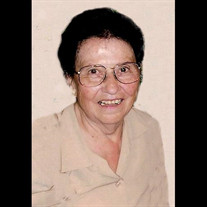 Mary Frances (Cruess) Jansky was born to George Paul Cruess and Mary Frances (O’Connor) Cruess on February 14, 1932, in Queens, New York, and passed away December 15, 2017, at Heritage Crossings Nursing Home in Geneva, Nebraska, at the age of 85 years, 10 months and 1 day. She was the oldest of seven children in the family. Mary attended elementary school at Our Lady of Sorrows in Corona, Queens, New York, and attended high school at St. Michael’s Catholic School in New York City until her junior year, when she quit school to help her ailing mother and help take care of her younger siblings. Mary later received her General Education Diploma (GED). She graduated in 1994 from the College of St. Mary-Lincoln Campus with an Associate’s Degree in Paralegal Studies. Prior to her marriage, Mary worked full time at Barricini Candy in New York City. After her employment at Barricini, she provided clerical services in Manhattan, New York. Mary met Lumir Jansky at a dance club in Germantown, Manhattan, New York, in early 1956 while Lumir was stationed in the U.S. Navy. Mary and Lumir eloped to get married on August 19, 1956, in Nassau County, Long Island, New York. They lived in an apartment at Sunny Side, Queens, New York, until late 1956 when they were relocated to Neptune Beach, Florida. In November 1957, Lumir was discharged from the Navy and they moved to a farm southeast of Milligan, Nebraska, where they lived their entire married life. Mary and Lumir had one son, William (Will), who was born in 1965. Moving to rural Milligan was initially a culture shock for Mary, who grew up in Corona, New York. For several years, Mary and Lumir had no indoor plumbing on the farm. But despite the inconveniences, Mary loved the fresh air and open space of rural Nebraska. Early in their marriage, Mary helped Lumir on the farm – trucking during harvest and helping take care of the livestock. She especially enjoyed canning produce from her garden and from the many fruit trees. She also liked raising sheep and was very pleased when her grandson, Darin, showed an interest in the sheep and took over the chores. Among her other favorites were dogs, politics, dancing and playing the lottery. Mary spent quality time with her two grandsons throughout their entire lives, supporting and videotaping all of their activities. She was more than ‘grandma’; she was their special friend and somebody they turned to in time of need. Mary was preceded in death by her husband, Lumir (5/13/2014); her parents, George and Mary (O’Connor) Cruess; brothers, George Cruess and infant brother Thomas; brothers-in-law, Bill Mack and Les (& Mary) Jansky; and sister-in-law Harriet (& Milton) Synovec. She is survived by son Will (Ann Kampschnieder) Jansky of Friend; grandsons Brent (Miranda Baxa) Jansky and Darin Jansky, both of Milligan; brothers, Raymond Cruess of Stony Brook, NY and John (Maria) Cruess of Holladay, UT; sisters, Patricia Cruess and Joanne (David) Roth, both of Holtsville, NY; sister-in-law, Leona Cruess of St. Augustine, FL and Marian (Walter) Umphlett of Santa Maria, CA, and brother-in-law, Larry (Diane) Jansky of Milligan along with many other relatives and friends. A Memorial Mass was held for Mary on Wednesday, December 20, 2017 at 10:30 a.m. and a Rosary was prayed on Tuesday, December 19, 2017 at 7:00 p.m. at St. Wenceslaus Catholic Church in Milligan, Nebraska. Father Steve Thomlison was the Celebrant for both services. Jessica Ruhl accompanied Karen Filipi and Karla Kassik in the singing of “Amazing Grace” and “May The Good Lord Bless & Keep You.” Jessica, Karen, and Karla sang “On The Day O’ Beautiful Mother” together, and Jessica also sang the solos “One Bread, One Body” and “Ave Maria.” Private Family Inurnment will take place at a later date in the Bohemian National Cemetery in Milligan, Nebraska. Farmer & Son Funeral Home of Geneva conducted the services. Online condolences can be left at www.farmerandsonfuneralhome.com Memorials are directed to the family for later designation.

The family of Mary F. Jansky created this Life Tributes page to make it easy to share your memories.

Send flowers to the Jansky family.