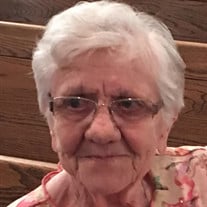 A Mass of Christian Burial will be held for Mary Ann on Friday, July 27, 2018, at 10:00 a.m., at St. Joseph Catholic Church in Geneva, Nebraska with Father Harlan Waskowiak officiating. Visitation will be held on on Thursday, July 26, 2018, from 1:00 p.m. until 5:00 p.m., at Farmer & Son Funeral Home in Geneva, Nebraska. Praying of the Rosary will be held on Thursday, July 26, 2018, at 7:00 p.m., at St. Joseph Catholic Church in Geneva, Nebraska. Graveside Services will be conducted following the Funeral Mass at the St. Joseph Catholic Cemetery in Geneva, Nebraska. In Lieu of Flowers memorials are to be directed to the family, they will be donated towards a Nursing Scholarship and the Catholic Seminary. Mary Ann (Hajek) Najmon was born December 12, 1936 on the family farm in Howells, Nebraska to William F. and Tillie Hajek. She was baptized into the Catholic faith at the family Church in Tabor, NE and continued to serve the Catholic Church throughout her life. Mary Ann was the youngest of three daughters growing up in rural Howells, Nebraska. She graduated from Howells High School in 1954 and enrolled at St. Catherine's School of Nursing in Omaha, NE. As a Mercy Nurse at the age of 19, she started her vocation of serving others. Mary Ann met her forever sweetheart, Clarence Najmon, on a blind date at the Howells Ballroom. They married on September 16, 1957 at St. John's Catholic Church in Howells, NE and God completed their family with three daughters. This love would last two lifetimes. Mary Ann loved her family, her faith, her church and serving others through nursing and mentoring. The compassion she had for nursing and love of people was apparent as a Staff Nurse and later through her administrative duties as the Director of Nursing at Fillmore County Hospital in Geneva, NE. With her adoration of music, sewing and gift to serve others, she was a woman of many talents and overflowing love. Mary Ann had no limits on her gifts of service to others through her faith, her family, and her devotion to St. Joseph's Catholic church. "Service to others is the rent we pay on this Earth" seemed to be her mantra. Mary Ann was preceded in death by her parents William F. and Tillie Hajek; beloved husband Clarence Najmon; sister Anna Sindelar and husband, Lumir; sister, Mildred Krepel; infant brother, William, born into heaven. She is survived by her children Susan Kerl and husband, Gerald of Geneva, NE; Mary Burgess and husband, William of Fairmont, NE; Nita Johnson and husband, Vanness of Orlando, FL; her grandchildren, Wade, Faith and Zackary Kerl; Christina (Joseph) Srajhans, Jessica (Christopher) Gage, Miranda (Nathan) Beck; Jaaziah and Azekiel Herrera; her great grandchildren; brother-in-law, Edwin Krepel; and numerous nieces, nephews and cousins.

A Mass of Christian Burial will be held for Mary Ann on Friday, July 27, 2018, at 10:00 a.m., at St. Joseph Catholic Church in Geneva, Nebraska with Father Harlan Waskowiak officiating. Visitation will be held on on Thursday, July 26, 2018,... View Obituary & Service Information

The family of Mary Ann Najmon created this Life Tributes page to make it easy to share your memories.

A Mass of Christian Burial will be held for Mary Ann on Friday,...

Send flowers to the Najmon family.