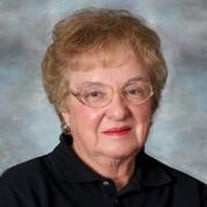 Funeral Services for Mary will be held on Friday, May 9, 2014 at 10:30 a.m. at the United Methodist Church in Geneva.  Following the Funeral, Graveside services will be held in the Geneva Public Cemetery.  Public visitation will be held on Thursday from 1:00 p.m. to 8:00 p.m. at the Farmer & Son Funeral Home in Geneva.  The family will be present at visitation from 6-8:00 p.m.Memorials are directed to the American Lung Association.   Mary Olive (Rudduck) Pittard was born to George Allen Rudduck and Mary (Picek) Rudduck on February 20, 1934 in Grand Rapids, Minnesota. One of four children, Mary began her life in Marble, Minnesota. After living a short time in Hastings, Nebraska she returned to Marble, Minnesota where she graduated from Greenway High School in May, 1951. After high school, she attended St. Luke’s Hospital School of Nursing in Duluth, Minnesota, graduating in May, 1954. Mary moved south after graduation and from June of 1955 to December of 1956 she worked as a nurse at the University of Texas MD Anderson Hospital in Houston, Texas. In December of 1956, during a trip back to Minnesota, she stopped in Geneva, Nebraska for a weekend not knowing what a change that would bring. By the end of that weekend she was engaged to be married. Mary was married to Roger LeRoy Pittard of Geneva, Nebraska on March 9, 1957 in Marble, Minnesota at the United Methodist Church. Roger and Mary had three children, Catherine (Pittard) Fairbanks, Kent Pittard, and Mark Pittard. Mary and Roger raised their children in Geneva, Nebraska. During these years they resided at the family farm and Mary worked as a Registered Nurse at the Fillmore County Hospital, then as a Registered Nurse, Consultant and Administrator at the Bethesda Care Center, a Relief Coordinator at Pioneer Mental Health, and as a part-time Registered Nurse at the offices of Dr. Verhage and Dr. Lynn. Outside of work Mary was involved in a number of organizations and kept busy with numerous hobbies. She was a member of the Geneva United Methodist Church, where she was a member of the Women’s Circle and member and officer of the Church Board. She was also a member of the Republican Women’s group, Farm Bureau, Lincoln Gem and Mineral Club, and Marketing Club. Her hobbies included reading, crafting, gardening, sewing, traveling, gourmet cooking, and rockhounding. Mary was preceded in death by her parents, George Allen Rudduck and Mary (Picek) Rudduck, and brother George Rudduck. She is survived by her husband, Roger Pittard; brother, Richard Rudduck and wife Raven; sister, Dorothy (Rudduck) Thomas, and husband Charles; children Catherine (Pittard) Fairbanks, and husband Tim, Kent Pittard and wife Lisa, Mark Pittard and wife Anne; grandchildren Jeremy Fairbanks and wife Tracee, Amber Popowski and husband Mark, Amanda Fairbanks, Heather Boaglio and husband Jon, Jon Pittard, Leah Fischer and husband Jon, Callie Pittard; great-grandchildren Brynna, Gracey and Brysen Fairbanks, Sam and Nate Boaglio, and Roman Popowski.

Funeral Services for Mary will be held on Friday, May 9, 2014 at 10:30 a.m. at the United Methodist Church in Geneva.  Following the Funeral, Graveside services will be held in the Geneva Public Cemetery.  Public visitation will be held on Thursday... View Obituary & Service Information

The family of Mary O. Pittard created this Life Tributes page to make it easy to share your memories.

Send flowers to the Pittard family.