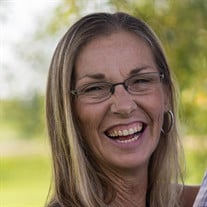 A Memorial Mass of Christian Burial will be held on Friday, September 22, 2017 at 10:00 a.m. at St. Joseph's Catholic Church in Geneva, Nebraska with Father Scott Courtney officiating. A Rosary will be held on Thursday, September 21, 2017 at 7:00 p.m. at St. Joseph's Catholic Church in Geneva, Nebraska. No Visitation as Mary's wishes were to be cremated. Memorials are to be directed to the family for a later designation. Burial of Ashes will be held following the Memorial Mass at the Geneva Public Cemetery. Mary Louise Rust was born to Thomas Charles Ousey and Judy Lea Cumberland on December 13, 1960, at York, NE, and passed away September 19, 2017, at Methodist Hospital in Omaha, NE, at the age of 56. She was one of four children in the family. Mary attended Catholic school, graduated from Geneva High School in the Class of 1979, stayed in Geneva to raise her family. Mary was married to the love of her life, Steven Wayne Rust, of Geneva, NE, on March 8, 1980, and to them four children were born inside of three years: Christopher James (CJ), Tiffany Suzanne, Marcus Wayne, and Kyle Thomas. Being the mother of four children three and under, was an enormous undertaking, but Mary handled it with all the grace and grit anyone could have imagined. Mary and Steve spent their days attending football, baseball, softball, volleyball, and basketball games and watching track meets. She was especially happy her children inherited their parents’ musical ability. When activities overlapped, they split their time and made sure to never miss an event. She was fiercely proud of her children and all their accomplishments, a fact overshadowed only by her love of her eight beautiful grandchildren. Grandma Mary was a highly sought after commodity for all the kids and she never ran out of energy, hugs, or kisses for any of them, often traveling to Texas to spread her love. Family was everything. She raised her children to “sweep their side of the sidewalk”, never “write the script”, and always treat others how you wanted to be treated. When she wasn’t loving on her grandchildren, she could be found in her garden, watching Nebraska Volleyball, shopping with her friends, or working on her house. As the DIY queen, there was nothing she couldn’t dream up for Steve to build. They were the ultimate team. She had the cleanest house in town and built a career out of her ability to organize and clean for other people. The people she cleaned for became her family. When her children were in school, Mary worked at the elementary school as a para-educator working with special needs children. She made many dear friends at this job and always appreciated her time there. In 1994, she began working at Cumberland’s Fashions, her family’s clothing store, a job she continued up until her death. She was known for her honesty and ability to decorate the store as well as she decorated her home. She was also an amazing cook and her broccoli was better than yours. Anyone who knew her knew she was also 29 years old in perpetuity. Mary was a once-in-a-lifetime friend. She kept a tight circle, and once you made it in, she would do anything for you. Friends were no longer friends, but family. Mary was preceded in death by her father, Tom Ousey, father and mother-in-law, Don and Laurine Rust, infant brother, Leon Ousey, and daughter-in-law, Erin Rust. She is survived by her husband, Steve Rust of Geneva, sons CJ Rust of Aurora, Marcus Rust (Amy), and Kyle Rust (Tinera) of Geneva, daughter, Tiffany of McKinney, TX, mother Judy Ousey of Geneva, brother, Chuck Ousey (Kim), of Council Bluffs, IA, sisters Patty Roper-Epperson (Everett) of Geneva, Cindy Bruning (Dan) of Bennington, sisters-in-law JoDee Mika (Paul) of Exeter, Jan Myers (Kurt) of Geneva, Jeanne Royal of Lincoln, grandchildren Avary, Rylie and Kennedi Davis of McKinney, TX, Madison, Judson and Spencer Rust of Geneva, and Braelynn and Lennon Rust of Geneva.

The family of Mary Louise Rust created this Life Tributes page to make it easy to share your memories.

A Memorial Mass of Christian Burial will be held on Friday, September...

Send flowers to the Rust family.