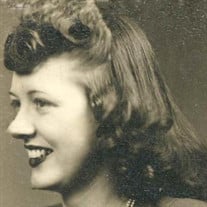 A Private Family Graveside Service for Mary will be held on Wednesday, December 16, 2020 at Geneva Public Cemetery with Rev. Christine Grosh presiding. No Public Visitation. In Lieu of Flowers - Memorials are to be directed to the family to be designated at a later date. Mary Katherine (Jasperson) Slocum passed away (dementia) on Friday December 11th, 2020 in Lincoln at age 94. Mary was born December 3rd, 1926 to Jens Christian Jasperson and Lizzie Katherine (Magee) Jasperson at a farmstead north of Hardy, Nebraska. She joined her brothers Garland, Harlan, and sister Dorothy. Mary attended Ruskin public school through the 8th grade, where she was a Girl Scout. Her father Jens died in 1931, but her family survived the Dust Bowl. Mary moved with her family to Nelson, Nebraska in 1941. She was baptized in the Christian Church at Nelson and attended the public High School there, graduating in the class of 1945. During her school years she worked at the Nuckolls County Treasurers Office. Mary also worked at the Hastings Naval Ammunition Depot in the powder room, risking her young life to support the war effort during WWII. Mary met Jack D. Slocum Sr. at a dance for soldiers and sailors on leave in Superior, Nebraska. They were married on Sept 8, 1945. Immediately following their marriage, Jack and Mary moved to Philadelphia, where Jack was stationed at the Naval Shipyard, and where they enjoyed big city life. The young couple returned to Nelson where all their children were born and where Mary was an avid businesswoman, helping Jack run his trucking depot as well as operating Slocum’s Cafe. All this was alongside the busy work of raising her family, caring for her mother Katherine and enjoying an active social life with friends. She was a member of the Rebecca Lodge and a charter member of the Nelson Nebraska VFW Auxiliary. In 1963, the Slocum family, along with Mary’s mother Katherine, moved to Geneva, Nebraska where she helped as a dispatcher for Wynne Transport, the family business. Mary bought and ran the Golden Steer (old Blanke bar) on Geneva Main Street from 1969 to 1976, selling it long before it burned in the 1990s. Mary was very active in the Democratic Party in Fillmore County, loved shopping at Cumberland’s Dress Shop and driving her car down Main Street. Several road trips with Jack Sr all across the United States complemented her Nebraska centered life. Jack Sr and Mary retired in 1978 due to Jack Sr’s illness and Mary cared for him until his passing, continuing to enjoy the support of good friends in the community. As a loving mother and grandmother, Mary welcomed grandchildren Shane, Paul, Windy Lu, Andrew, Deann, Jessica, Anna, Matthew, Daniel. To this large and loving family was added great-grandchildren Katelyn, Brandon, Jackson, Ashley, Lilly, Seth, Leeanna, Isabelle, Owen, Jacob, Shawn, Samuel, Harper and Jack Robert. Mary is preceded in death by her husband, parents, brothers and sister, nephews Roger and Dennis, and her grandson Todd. She is survived by children Nancy (JP Weber), Linda (Willie Ideen), Jill (Gwendolyn Hustvedt) and Jack Jr. (Cindy Jacobsen) and the children’s special friend Marilyn Carlson.

A Private Family Graveside Service for Mary will be held on Wednesday, December 16, 2020 at Geneva Public Cemetery with Rev. Christine Grosh presiding. No Public Visitation. In Lieu of Flowers - Memorials are to be directed to the family to... View Obituary & Service Information

The family of Mary K. Slocum created this Life Tributes page to make it easy to share your memories.

A Private Family Graveside Service for Mary will be held on Wednesday,...

Send flowers to the Slocum family.