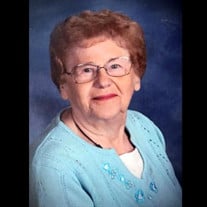 A Funeral Mass for Mary Ann was held on Friday, October 12, 2018 at 10:30 a.m. at St. Stephen Catholic Church in Exeter. A Rosary preceded the Mass at 10:00 a.m. Monsignor Daniel Seiker officiated the services. Agnes Anderson was the organist... View Obituary & Service Information

The family of Mary Ann Votipka created this Life Tributes page to make it easy to share your memories.

Send flowers to the Votipka family.