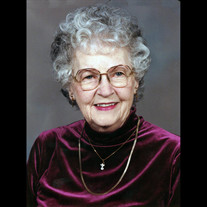 Mary Georgianna Westfall was born to Allen & Hazel (Strong) Doan in Point Loma, California on September 21, 1922. Following a rough week at home, she asked to go to Heritage Crossings Nursing Home in Geneva in April of 2017 where she remained until her passing on December 12, 2017 at the age of 95 years, 2 months, and 21 days. Mary grew up in California. She was baptized at the First Lutheran Church in El Cajon, California. She met and married the love of her life, Dan Westfall, while working as a secretary for Insurance Company in the 1940’s. Mary served as the Church Organist and Sunday school teacher for many years in both the Alpine Lutheran Church in California and the Lutheran Church in Marion, South Dakota. She loved the Midwest and moved to her husband’s hometown of Marion, South Dakota when they retired in 1977. They had a small home-based business selling crafts and wooden toys. After Dan passed away in 1990, Mary stayed in Marion until 2007 when she moved to Geneva, Nebraska to be closer to her son and daughter-in-law John & Nina Westfall. She was 85 at this time and handled the packing, garage sale, and moving arrangements herself. She adapted quite easily to her new home and loved visiting the ladies at the Geneva Senior Center. She also became active in the Grace Lutheran Church participating in Church Services and Bible Studies. Mary loved the outdoors, gardening, reading, and playing scrabble with family & friends. Mary was preceded in death by her parents; husband Daniel; sisters Lucille, Barbara, Julie; and brother Bryce. She leaves behind sons John & Nina Westfall of Geneva, Nebraska, Gordon Westfall of Golden Valley, Arizona, Daniel & Kathleen Westfall of Lake Havasu City, Arizona; grandsons David & Stacy Westfall and Michael & Ginger Westfall all of Columbus; great grandchildren Cody, Triston, Carmen, Larkin, and Isaiah; and very special nieces and nephews. A Funeral Service was held on Saturday, December 16, 2017 at 10:30 a.m. at Grace Lutheran Church in Geneva. Pastor Steve Kruschel officiated the service. Cherie Domeier accompanied the congregation in the singing of “Jesus And Shall It Ever Be,” “How Great Thou Art,” “Amazing Grace,” and “I Know That My Redeemer Lives.” Pallbearers for the service included Mike Westfall, Dave Westfall, Isaiah Westfall, Triston Westfall, John C. Westfall, and Mark Wythers. Interment was held in the Geneva Public Cemetery. Farmer & Son Funeral Home conducted the services and online condolences may be left at www.farmerandsonfuneralhome.com. Memorials are suggested to the Grace Lutheran Church or Geneva Senior Center.

Mary Georgianna Westfall was born to Allen & Hazel (Strong) Doan in Point Loma, California on September 21, 1922. Following a rough week at home, she asked to go to Heritage Crossings Nursing Home in Geneva in April of 2017 where she remained... View Obituary & Service Information

The family of Mary G. Westfall created this Life Tributes page to make it easy to share your memories.

Send flowers to the Westfall family.