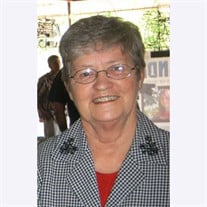 Memorial services for Marylee will be held on Thursday, October 16, 2014 at 2:00 p.m. at the Farmer & Son Funeral Home in Geneva. Private family graveside services will be held in the Fairmont Public Cemetery. Memorials are directed to the family for later designation. Marylee L. Edwards was born on March 4th 1943 in Denver, Colorado to Lloyd and Evelyn (Patton) Tucker. She passed away on October 9th, 2014 at Heritage Crossings in Geneva after a long battle with Dementia. Marylee graduated from Fairmont High School with the class of 1961. She always lived life to the fullest and never was afraid to try anything at least once. She at one time was a Powder Puff Racer, Truck Driver and was employed as a Bus Driver for Fairmont Public Schools. She worked throughout her life in the Food Service Industry. She was employed by Mumby’s Cafe and the Stockmen’s Club both of Fairmont. She later went on to fulfill a life-long dream of owning and operating the Tower Cafe in Fairmont. She always assured everyone that they would have the utmost service, respect and most of all a good time. She was a member of the American Legion Auxiliary in Fairmont. Her hobbies included Jigsaw Puzzles, Sewing, Board Games /Card Playing and she was an Abide Bowler. What she valued most of all was spending time with her children, grandchildren, great grandchildren and friends abroad. She was preceded in death by her husband Charles Ray Edwards; parents Lloyd and Evelyn Tucker; and sons James Pendergast and Charles Edwards. She is survived by daughters Sherry Jantzi and husband, Jerry, of Fairmont, Shawnie Manthei and husband, Ed, of Geneva, Tiffany Kapperman and husband, Kurt, of Holbrook, Brandi West of Hastings; son Cody Edwards and Tabitha, of Fairmont; brother Lloyd Tucker and wife, Jackie, of Grand Island; sisters Joyce Otoupal and husband, Merritt, of York, Shirley Jones and husband, Rick, of Sutton, Judy Baumer and husband, Gary, of Rocky Face Georgia; Sisters-In-Law Margaret Kennedy and husband, James, of El Paso, Texas; Peggy Halliday of Hagerman, New Mexico; 20 grandchildren, 19 great grandchildren; and many nieces and nephews.

Memorial services for Marylee will be held on Thursday, October 16, 2014 at 2:00 p.m. at the Farmer & Son Funeral Home in Geneva. Private family graveside services will be held in the Fairmont Public Cemetery. Memorials are directed to the... View Obituary & Service Information

The family of Marylee L. Edwards created this Life Tributes page to make it easy to share your memories.

Memorial services for Marylee will be held on Thursday, October...

Send flowers to the Edwards family.