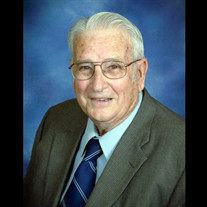 Maurice Hafer was born on the family farm near Strang, Nebraska to Cleveland and Stella (White) Hafer on November 22, 1928. He passed away at Fairview Manor in Fairmont, Nebraska on Sunday, January 13, 2019 at the age of 90 years, 1 month, and 22 days. He was the youngest of six children. Maurice had two sisters, Doris and Vivian and three brothers, Dean, Orville and John Waldo. Being the youngest, we understand that he was well taken care of by all of his siblings, but especially by his older sisters. Maurice graduated from Geneva High School in 1946. After graduation, he continued to work on the farm. During this time he met Shirley Garrison of Ohiowa, Nebraska. They were married on August 28, 1949 and continued to live on the farm near Strang before moving to Shirley's parents' farm south of Ohiowa. The family grew with the birth of their children, Galen and Kay. Maurice was a successful, lifelong farmer and livestock producer. He was a member of the Ohiowa United Methodist Church and later the Geneva United Methodist Church. He served several offices for the church while in Ohiowa. He was also active in the community, serving on the Ohiowa Public School Board, the Fillmore County Fair Board, County Extension Director's Board and was a 4-H Club assistant leader for the Ohiowa 4-H Rustlers. During this time he received an Ak-Sar-Ben award for his 4-H leadership contributions. Maurice enjoyed being with and supporting his family in all their endeavors. He and Shirley loved to have the grandchildren spend time at the farm. Many stories could be told about their time with Grandpa and Grandma at the farm. Maurice enjoyed bowling, playing cards and cooking. Not surprisingly, he was good at them all. Maurice and Shirley were married until her death in March 25, 1998. They enjoyed over 48 years together. A few years later, Maurice met JoAnn Williams of Geneva and they married on July 13, 2001 in Colorado. They lived in Geneva until her death in August 7, 2013. Maurice entered the Fairview Manor in Fairmont, Nebraska in July of 2016. He remained there until his death. Maurice was preceded in death by his parents Cleve & Stella; wife Shirley Hafer; wife JoAnn Hafer; brothers Dean, Orville, and John Waldo; and sisters Doris & Vivian. He is survived by his children Galen (Jackie) Hafer and Kay Shenefelt; four grandchildren Molly (Matthew) Sass, Hannah (Johnny) Grumbles, Ashley Shenefelt, Colton (Sarah) Shenefelt, two great-grandchildren Noah Sass and Emma Sass. He also leaves to mourn many nieces, nephews, relatives and friends. A Funeral Service for Maurice was held on Wednesday, January 16, 2019 at 10:30 a.m. at the United Methodist Church in Geneva. Kim Dunker officiated the service. Melissa Houchin accompanied the congregation in the singing of “How Great Thou Art,” “Hymn Of Promise,” and “In The Garden.” Pallbearers for the service included Colton Shenefelt, Matthew Sass, Johnny Grumbles, Gaylen Dunse, Spencer Hafer, and Greg Krupicka. Interment was held in the Ohiowa Public Cemetery following the Funeral Service. Farmer & Son Funeral Home was in care of the arrangements and online condolences can be left at www.farmerandsonfuneralhome.com Memorials are suggested to the Ohiowa Fire & Rescue, Geneva United Methodist Church, or Fairview Manor.

Maurice Hafer was born on the family farm near Strang, Nebraska to Cleveland and Stella (White) Hafer on November 22, 1928. He passed away at Fairview Manor in Fairmont, Nebraska on Sunday, January 13, 2019 at the age of 90 years, 1 month,... View Obituary & Service Information

The family of Maurice L. Hafer created this Life Tributes page to make it easy to share your memories.

Maurice Hafer was born on the family farm near Strang, Nebraska...

Send flowers to the Hafer family.