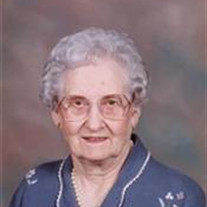 Maurine (Venell) Zetterman was born to Arthur and Susanna Venell on January 15, 1912 at Shickley, Nebraska, and passed away in Geneva, Nebraska at the age of 100 years. She was one of five children (all girls). She had a twin sister, Marian, who died at the age of 3½ years. She grew up on a farm west of Shickley and attended grade school at District 87, then graduated from Shickley High School in 1929. Maurine took teacher’s exams and attended Kearney State where she earned her certificate to become a teacher and taught several years. She was a member of Shickley United Methodist Church and took an active part in the music of the church. She sang in the choir many years and also was organist several years. She was united in marriage to Verlie Zetterman on August 28, 1935. To this union two sons, Lowell and Rowen, were born. They made their home on the farm where Maurine was born, her parents having moved to Shickley. Maurine and Verlie took many trips including a trip to Hawaii in 1985 with her three sisters and their husbands. They took a trip to Europe in 1987. They went on many bus tours in the United States, having been to nearly every state in the Union. She was preceded in death by her parents, her sisters Marian, Moneta and Ruth, Verlie, her husband of 65 years, and her older son, Lowell. She is survived by her younger son, Rowen, and wife Joanie of Omaha, daughter-in-law Diane of Lincoln, one granddaughter, Suzan Culver and husband Kevin of Owensboro, Kentucky, four grandsons Stuart Zetterman and wife Kim of Lincoln, David Zetterman of Seward, Alaska, Justin Zetterman and wife Julie of Omaha, Corey Zetterman and wife Jolene of Omaha, , great grandchildren Zachary and Brady Culver, Colton and Shea Zetterman, Emily, Allison and Turner Zetterman, Peyton and Mason Zetterman, sister Katherine Nippert, brother-in-law Emil Pearson, and many nieces and nephews and friends. Memorial services 2 p.m., Tuesday, at the United Methodist Church in Shickley, Nebraska. Viewing only at the Farmer & Son Funeral Home in Geneva on Monday from 1 p.m. until 8 p.m. Private family graveside at the Swedish Cemetery rural Shickley. Memorials to the United Methodist Church

Maurine (Venell) Zetterman was born to Arthur and Susanna Venell on January 15, 1912 at Shickley, Nebraska, and passed away in Geneva, Nebraska at the age of 100 years. She was one of five children (all girls). She had a twin sister, Marian,... View Obituary & Service Information

The family of Maurine E. Zetterman created this Life Tributes page to make it easy to share your memories.

Maurine (Venell) Zetterman was born to Arthur and Susanna Venell...

Send flowers to the Zetterman family.