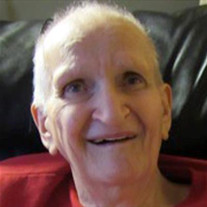 A Funeral Service for Max will be held on Tuesday, April 16, 2019, at 10:30 a.m., at Farmer & Son Funeral Home in Geneva, Nebraska with Kim Dunker presiding. Visitation will be held on Monday, April 15, 2019, from 1:00 p.m. until 8:00 p.m., at Farmer & Son Funeral Home in Geneva, Nebraska. Military Graveside Services will be held following the funeral service at the Ohiowa Public Cemetery in Ohiowa, Nebraska with the Ohiowa American Legion - Franklin Post 193 honoring Max's service to our country. Memorials are to be directed to the family to be designated at a later date. Max Dale Bahe was born to William and Malinda (Domeier) Bahe on January 21, 1935 in Ohiowa, and passed away April 10, 2019, in Geneva, at Heritage Crossings at the age of 84 years. He was one of 12 children in the family. He was raised in Ohiowa and graduated from Ohiowa High School in 1953. He served in the United States Army from October 28,1961 – January 6, 1964. He returned to Ohiowa and worked for elevators in many towns in the Ohiowa area, and retired from Bruning Grain. Max enjoyed playing basketball, baseball and softball. He attended many of his nieces and nephews events and activities. He enjoyed family gatherings. Max was proceeded in death by his parents; brothers Elmer, Wilmer, Kenneth, Keith, Marlin, Lester, Lowell and Rex; sisters Lucille, Ruth and Betty. He is survived by many nieces and nephews, great nieces and nephews, great-great nieces and nephews.

The family of Max D. Bahe created this Life Tributes page to make it easy to share your memories.

A Funeral Service for Max will be held on Tuesday, April 16,...

Send flowers to the Bahe family.