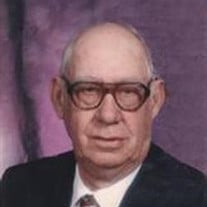 Melvin Lewis Blanke, age 93, formerly of Geneva, died Thursday, July 31, 2014 at the Blue Valley Lutheran Nursing Home in Hebron. Melvin was born on the family farm by Strang on January 25, 1921 to Lewis and Maria Blanke. He was a member of Grace Lutheran Church, Ohiowa, being both baptized and confirmed at this church. At the time of his death, he was the oldest living member of the church. He attended District 84 school, receiving his 8th grade diploma in 1935, with numerous awards as well as perfect attendance. After graduation, Melvin farmed with his parents. Dances and outdoors movies were the main forms of entertainment in his youth. A dance was where he met Marie, who later became his wife on December 28, 1944 at Grace Lutheran Church in Ohiowa. The couple resided on the Blanke homestead east of Strang. Melvin always joked that the most of expensive Father’s Day present he received was the birth of his daughter, Madolene Marie, born on Father’s Day. Melvin and Marie enjoyed 68 years of marriage. On December 4, 1959, after the sale on the farm, the couple moved to Geneva. Melvin worked as a carpenter building houses for many years with Murray Holmes. Following that, he went to work part-time at Gambles and also worked as a police officer for the city of Geneva for 1 year. He decided police work was not for him, and went to work for Gambles full-time. Melvin changed professions in 1968, working for the State Department of Roads. He retired in 1986 with 17 years of service, spending lots of nights plowing snow, as well as mowing and other maintenance/repair work. Melvin served in all leadership offices of the church, from President to Treasurer. He served on the cemetery board, and performed a lot of maintenance work. Melvin loved to sing, and sang solos for local weddings and funerals, in the church choir, as well as harmonizing in barbershop quartets. Mel was always a helpful person and volunteer, doing remodeling projects for family and friends. He loved building furniture, and all of the grand kids and many nieces and nephews received his toy cupboards and cedar chests. Melvin completely restored a 1929 Model A car, and a Model A 1941 John Deere Tractor, both of which he drove in many area parades. Melvin and Marie also enjoyed collecting antiques. Melvin’s loves were going square dancing, polka dances, campers club, and a bowling league. There was never a dull moment when Melvin was around. He was well known down at the nursing home for having his religious and polka music playing. He was preceded in death by his parents, Lewis and Maria, wife Marie, two sisters, Fern Hintz and Laverne Dageforde, granddaughter, Laurel Neubauer, and nephews Verlyn Hintz and Darrel Dageforde. He is survived by his daughter Madolene Neubauer and husband Larry of Bedford,TX; grandson Mark Neubauer of Fort Worth, TX; granddaughter Michele Newbrough and husband Michael of Fort Worth, TX and great-granddaughter Kirsten Newbrough of Fort Worth, TX and many family and friends. Funeral service for Melvin will be 2:00 p.m. Monday, August 4, 2014, at the Grace Lutheran Church, rural Ohiowa, Nebraska. Interment will be in the Grace Lutheran Cemetery. Visitation will begin Sunday at 1 p.m. until 8 p.m. with family greeting friends from 6 to 8 at the Farmer & Son Funeral Home in Geneva, NE. Memorials are directed to the Grace Lutheran Church.

Melvin Lewis Blanke, age 93, formerly of Geneva, died Thursday, July 31, 2014 at the Blue Valley Lutheran Nursing Home in Hebron. Melvin was born on the family farm by Strang on January 25, 1921 to Lewis and Maria Blanke. He was a member... View Obituary & Service Information

The family of Melvin L. Blanke created this Life Tributes page to make it easy to share your memories.

Send flowers to the Blanke family.