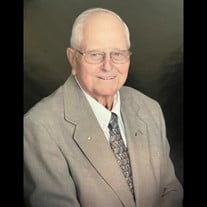 Melvin Robert Vavra was born to Joseph Jr. and Rose (Stech) Vavra on the family farm five miles northeast of Milligan on November 11, 1927. He passed away on Monday, February 1, 2022, at Heritage Crossings in Geneva at the age of 94 years, 2 months, and 21 days. Melvin was the youngest of three sons. He was baptized at St. Wenceslaus Catholic Church in Milligan, and he remained a member of the church his entire life serving many years as an acolyte and lector. Melvin attended Saline County School District #96 for eight years and graduated from Milligan High School in 1945. He enlisted into the Army on April 6, 1946, and received his basic training at Aberdeen, Maryland, with additional training in Artillery, specializing in the Army Ground Force. On October 8, 1946, Melvin was sent overseas to the Pacific Theatre of Operations and served one year in Korea as a Military Policeman, and received the Army of Occupation Medal and WWII Victory Medal. He was discharged on October 2, 1947, and had obtained the rank of Sergeant. Melvin married Arlene May Laun on June 7, 1949, at St. Wenceslaus Church and they celebrated their 72nd wedding anniversary in 2021. To this union six children were born: Dwight (who died in infancy), David, Lois, Janet, Mark and Gary. He was a life-long farmer, and also owned a plumbing, heating and electrical business, Dave’s Radio & TV, in Milligan for more than 15 years. Melvin was very supportive and active in many organizations and causes, including the Milligan American Legion Post #240, the Knights of Columbus, President of the Saline County Right-to-Life, Board member of the Milligan Farmer’s Coop, the National Farmers Organization, Secretary/Treasurer and Trustee of the Milligan North Cemetery, Board member of the Milligan South Cemetery, Treasurer of County School District #100, was instrumental in organizing the Milligan Rural Fire Department, and an active member of the Milligan Community Club. Melvin was always volunteering for the betterment of his church, community, and country. He was well known for: his love of family; pride in his Czech heritage; willingness to lend a helping hand; socializing with friends; faith and strong belief in God. He enjoyed attending family school activities, listening and dancing to Czech music, reading, fishing, woodworking, attending auctions and spending time with his canine companions. Melvin was preceded in death by his parents, Joseph and Rose Vavra, Jr.; parents-in-law, James and Anna Laun; son, Dwight; son-in-law, Dennis Bartels, brothers Armand, and Darrell and wife, Elma. He is survived by his wife, Arlene of Milligan; children: David and wife Dana Vavra of Friend; Lois Vavra of Colorado Springs, CO; Janet Bartels of Tobias; Mark Vavra of Milligan; and Gary and wife Crystal Vavra of Milligan. Grandchildren: Derrick and wife Michaelynn Vavra of York; DeAnna and husband Dennis Mitcham of Hastings; Deborah and husband Anthony Buonomo of Wheaton, IL; Tamara and husband Jeremy Mostek of Hickman; Jonathan and wife April Vavra-Fong of Parker, CO; Britnee and husband Dustin Hoffner of Papillion; and Missy and husband Brian Cronstrom, Omaha. Great-grandchildren; Derrick, Jr., Ian and wife Abby; Jacob, and Zachery Vavra; Alexa and KayLynne Mitcham; Devin Searcey, Dylan and Mason Mostek, Ayden and Aspen Vavra-Fong; Emma and Tristan Hoffner; Caden, Charlee and Rowan Cronstrom; many nephews and nieces; and a host of other relatives and friends. A Funeral Mass for Melvin was held on Saturday, February 5, 2022 at 10:30 a.m. at St. Wenceslaus Catholic Church in Milligan, Nebraska. A Rosary preceded the Mass at 10:00 a.m. at the Church. Father Brendan Kelly and Father Harlan Waskowiak presided over the Service. Shirley Milton accompanied Karen Filipi in the singing of “Lord, When You Came To The Seashore,” “Here I Am Lord,” “I Am The Bread Of Life,” and “Going Home.” Pallbearers for the Service included Derrick Vavra, Jon Vavra Fong, Jeremy Mostek, Brian Constrom, Dustin Hoffner, Anthony Buonomo, and Dennis Mitcham. Honorary Pallbearers included Michaelynn Vavra, April Vavra Fong, Tamara Mostek, Missy Constrom, Britnee Hoffner, Deborah Buonomo, and DeAnna Mitcham. A Graveside Service with Military Honors was held in the Bohemian National Cemetery following the Funeral Mass. Military Honors were performed by the Milligan American Legion HSSK Post 240. Farmer & Son Funeral Home was in care of arrangements and online condolences can be left at www.farmerandsonfuneralhome.com Memorials are suggested to the Bohemian National Cemetery or the Cesky Bratri (North) Cemetery. CARD OF THANKS The family of Melvin Vavra expresses its heartfelt thanks to everyone for the many kindnesses shown during this time. We especially want to thank the staff at Heritage Crossings for their wonderful care and support and Farmer and Son Funeral Home for their assistance and guidance. Also, the visits and prayers from Fr. Brendan Kelly and Fr. Harlan Waskowiak were a blessing for Melvin. A special thanks to the Milligan American Legion Post #240 for the color guard and firing squad, and to the St. Wenceslaus Altar Society and to the Milligan Legion Auxiliary Post #240 for preparing and serving the delicious lunch. The Vavra family has been very fortunate to have many wonderful relatives, neighbors and friends. Melvin Vavra Family

Melvin Robert Vavra was born to Joseph Jr. and Rose (Stech) Vavra on the family farm five miles northeast of Milligan on November 11, 1927. He passed away on Monday, February 1, 2022, at Heritage Crossings in Geneva at the age of 94 years, 2... View Obituary & Service Information

The family of Melvin R. Vavra created this Life Tributes page to make it easy to share your memories.