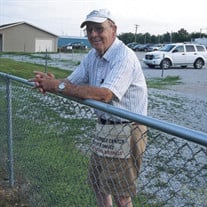 Merl K. Stephens was born to William Stephens and Alta (Cline) Stephens on November 13, 1925 in Mankato, Kansas, and passed away June 26, 2019 at Fairview Manor in Fairmont Nebraska at the age of 93 years, 7 months, and 13 days. He was one of seven children born in the family. Merl graduated from Mankato High School in Mankato, Kansas in 1944. He worked for the R.E.A after graduating until he married Hearldine Whartman in 1951 in Nelson, Nebraska. Merl served in WWII, was a member of the United Methodist Church, the America Legion and V.F.W. He was proud of being a veteran of the military. Merl loved sports of all kinds, going to auctions, eating at the Senior Center and spending time with his grandchildren and great grandchildren. He spent countless hours taking tickets at Legion Baseball Games, and he could always be found in his seat on the front row of the bleachers by the main entrance of the Fillmore Central Gym or leaning against the fence at home football games. Merl was preceded in death by his wife Hearldine (Whartman) Stephens; parents William and Alta (Cline) Stephens; three sisters Margaret Bowden, Helen Simons, and Mary Bell Nelson; and three brothers Glenn Stephens, Vern Stephens, and Dean Stephens. Merl is survived in death by three sons Brad and Carolyn Stephens and their children Jordan and Jared of Geneva, Nebraska, Craig Stephens and Kim Stephens both of Crete, Nebraska; Daughter Peg and her husband Leander Gillen of Wichita, Kansas and their children Chad Atchison and wife Alyse and their children Ethan and Ella of Cozad, Nebraska, McKenzie Allen and her husband Freeman and their children Trindon, Zayden, Rylie and Evan of Wichita, Kansas, Carrie Gillen of Lincoln Nebraska, and Andy and Charlie Gillen both of Ogallala, Nebraska. A Funeral Service for Merl was held on Tuesday, July 2, 2019 at 10:30 a.m. at the United Methodist Church in Geneva. Pastor Doug Griger officiated the service. Sondra Myers accompanied the congregation in the singing of “The Old Rugged Cross” and “Hymn Of Promise.” Geneva VFW Samuel J. Marsh Post 7102 conducted Military Honors outside the church following the Funeral Service. Pallbearers for the service included Freeman Allen, Chad Atchison, Jordan Stephens, and Jared Stephens. Interment was held in the Nelson Cemetery. Farmer & Son Funeral Home of Geneva was in care of the arrangements and online condolences can be left at www.farmerandsonfuneralhome.com. Memorials are suggested to the Geneva Senior Center.

Merl K. Stephens was born to William Stephens and Alta (Cline) Stephens on November 13, 1925 in Mankato, Kansas, and passed away June 26, 2019 at Fairview Manor in Fairmont Nebraska at the age of 93 years, 7 months, and 13 days. He was one... View Obituary & Service Information

The family of Merl Stephens created this Life Tributes page to make it easy to share your memories.

Send flowers to the Stephens family.