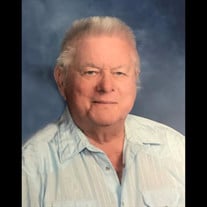 Merle Joseph Reinsch of Shickley, NE, passed away August 10, 2021, at MercyOne Siouxland Medical Center in Sioux City, IA at the age of 85. Merle was born November 30, 1935, on the Reinsch Family Homestead to William and Margaret Ann (Erthum) Reinsch; he was the twelfth of thirteen children. He attended Country Grade School District 79 before leaving to help his dad farm. Merle later returned to Shickley High School and graduated Salutatorian of the class of 1956. He joined the U.S. Army and was deployed in Alaska from 1957-1959. After his service, Merle began farming on his own. Merle married Betty Jean Baxa on January 6, 1962, at St. Joseph Catholic Church in Tobias. Together, they had four children and continued to reside on the Reinsch Homestead founded in 1873; where Merle kept hogs, chickens and cows and received the Pioneer Farm Family award in 1973. Nearly every morning, Merle would check his herd and explore his pasture after coffee at Elaine’s in Milligan. Merle and Betty often traveled with family and had many entertaining stories of ‘getting lost’ on their excursions with his sister Jeanette and brother-in-law Joe. Merle enjoyed dancing to polkas, waltzes and classic country music and would be found on the dance floor many weekends. In his later years, Merle loved sitting on his cabin porch admiring the pond, nature and growing family. Merle was a lifelong member of St. Mary’s Catholic Church in Shickley and belonged to the Shickley American Legion Post #164 and the Eagles Aerie #592 of Hastings. Merle was preceded in death by his parents, brothers: Edward, Clarence, William, Herbert, Francis and Wayne, sisters: Viola Stengel, Gertrude Dondlinger, Marguerite Getz, Joann Haufle and Patricia Bourke. He is survived by his wife, Betty, of 59 years, children: Cheryl (Reggi) Simonsen of Sutton, Catherine Reinsch of Carmel, CA, Craig (Lisa) Reinsch of Shickley, Charlotte (Andrew) Hansen of Park Rapids, MN; 8 grandchildren: Amber (Jeremiah) Peterson of Grafton, Lauren Simonsen of Lincoln, Megan (Kyle) Villa of Brooklyn, NY, Brett Simonsen of Sutton, Nicole (Garrett) Effenbeck of Hebron, Taylor Reinsch of Shickley, Brooks Hansen of Oklahoma City, OK, and Will Hansen of Park Rapids, MN; 6 great-grandchildren: Breckyn, Kyler, Rory, and Witten Peterson of Grafton, Liam and Easton Effenbeck of Hebron and sister Jeanette Schommer of Lincoln and many nieces and nephews. A Funeral Mass for Merle was held on Saturday, August 14, 2021 at 10:30 a.m. at St. Mary Catholic Church in Sutton, Nebraska. A Rosary was prayed at the Church at 10:00 a.m. prior to the Mass. Father Michael Zimmer presided over the Mass & Rosary. Gwenda Mau accompanied Michelle Schmer who led the congregation in the singing of “Be Not Afraid,” “Here I Am Lord,” “One Bread, One Body,” “On Eagle’s Wings,” and “How Great Thou Art.” Pallbearers for the service included Jeremiah Petersen, Garrett Effenbeck, Alex Comte, Taylor Reinsch, Kyle Villa, Brooks Hansen, Will Hansen, and Brett Simonsen. A Graveside Service with Military Honors was held in the St. Mary (Turkey Creek) Catholic Cemetery, rural Shickley, Nebraska, following the Funeral Mass. Military Honors were provided by the Shickley American Legion Post 164 and the Nebraska Military Honor Guard. Farmer & Son Funeral Home was in care of the arrangements and online condolences can be left at www.farmerandsonfuneralhome.com Memorials may be given to St. Mary’s Catholic Church and American Legion Post #164 in Shickley and St. Mary’s Catholic Church in Sutton.

The family of Merle J. Reinsch created this Life Tributes page to make it easy to share your memories.