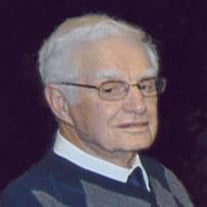 Memorial services for Merlin will be held on Saturday, August 6, 2016 at the Salem Mennonite Church in rural Shickley, Nebraska at 10:30 a.m. with Pastor Shawn Nolt officiating. No Visitation-cremation. Graveside services will be held at a later date. Memorials are to be directed to the family for a later designation. Merlin L. Erb was born July 15, 1922 to Mose K and Ida Schweitzer, Erb in Saline county Nebraska. The family lived on a farm near Beaver Crossing, then moved to a farm southeast of Shickley then to the family farm north of Martland Nebraska. Merlin accepted Jesus Christ as his personal savior and was baptized in October of 1936 at Salem Mennonite church south of Shickley, Nebraska. Merlin was the oldest of 9 children; sister Wilma was the youngest at 2 years old when their mother passed away in 1938. Merlin’s first job off of the farm was for David Steider at his produce and feed business in Shickley. On February 22, 1949 Merlin was united in marriage to Bernetta Zehr. The next 10 years the worked together on the farm. In 1959 Merlin and Bernetta purchased The Thornton lumber and coal business and moved to Shickley. In the fall of 1988 the lumber business was sold to long time employees Wes and Linda Hochstetler. Merlin’s strong belief in the mission of the church was evident as in his retirement many years were spent traveling and volunteering with Mennonite Disaster Service, Habitat for Humanity, and Mennonite Voluntary service. Merlin’s last selfless act of kindness was to donate his body to the Anatomical Board of the State of Nebraska for medical education and scientific research. Merlin is survived by his wife Bernetta, sister Norma Troyer and husband James brother in law Sam Oswald all of West Point, Nebraska, sister in law’s Ruth Erb of Shickley, Nebraska, Mary Armfield of Hesston, Kansas, Arlyce Friesen of Henderson Nebraska, and many nieces, nephews cousins and friends. Merlin was preceded in death by a half sister Elsie, sister’s Mary, Mattie Troyer and husband Roy of Cory Pennsylvania, Dorothy Oswald , Gladys Troyer and husband Lester of West Point, Nebraska, Wilma Troyer and husband Ivan of Beemer Nebraska, brothers Robert of Hesston, Kansas, Alvin of Shickley, Nebraska, and Virgil of Henderson, Nebraska.

Memorial services for Merlin will be held on Saturday, August 6, 2016 at the Salem Mennonite Church in rural Shickley, Nebraska at 10:30 a.m. with Pastor Shawn Nolt officiating. No Visitation-cremation. Graveside services will be held at a... View Obituary & Service Information

The family of Merlin Lenard Erb created this Life Tributes page to make it easy to share your memories.

Memorial services for Merlin will be held on Saturday, August...

Send flowers to the Erb family.