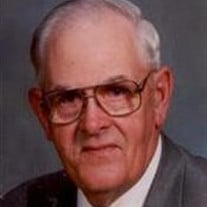 Mervin H. Henricksen was born to Levi L. Henricksen and Carrie M. Johnson Henricksen on November 29, 1921 at rural Cordova, NE, and passed away July 12, 2013 at Exeter Care Center in Exeter Ne at the age of 91. He was an only child. Mervin attended rural country school near Cordova through 8th grade. He was drafted into the U.S. Army on October 2, 1942 at Fort Crook, NE. Basic training took place at Camp White in Oregon with the 91st Infantry, he was a member of the 916th field artillery. After basic training he went to cook and bakers school, he became an Army cook and spent 1 ½ years in Oregon. He then left for Hampton Roads, VA for overseas by convey to Oran Africa. He served at Naples Italy as a Mess Sargent. Mervin was involved in the battles of Rome Arno, North Apennines, and Po Valley. After 1 ½ years of service overseas he was discharged on November 4, 1945. After the service he came home and farmed until he retired. On November 29, 1952 Mervin was united in marriage to Lucille Polacek in Lincoln, NE and were blessed with 2 daughters Susan and Sharon. They made their home on a farm near Cordova until December of 2006 they moved to York, NE. He spent the past 5 years at the Exeter Care Center in Exeter, NE. Mervin was baptized and confirmed at the Trinity Lutheran Church in Cordova. Later he joined the St. Stephens Catholic Church in Exeter. He was a member of the American Legion Post 359 of Cordova, where he was a member for 67 years. Mervin enjoyed cooking, gardening visiting with people and attending his granddaughters activities. He is preceded in death by his wife Lucille, and his parents. He is survived by daughters Sharon Henricksen of Lincoln, NE and daughter and son-in-law Susan and Craig Dallegge of Hampton, and 2 granddaughters, Laura Dallegge of Lincoln and Kara and Matt Adams of North Platte, NE. Other survivors include his Aunt Doris Henrickson of York, and sister-in-law Sophie Steager of David City, nieces, nephews, and a host of other relatives and friends. Funeral services 10:30 a.m., Thursday, at the St Stephen's Catholic Church in Exeter. Rosary will be 10:00 a.m., Thursday before the Funeral Mass at the church. Visitation from 4 p.m. until 8 p.m., Wednesday, at the Farmer Funeral Home in Exeter. Family greeting friends from 5 p.m. until 7 p.m.. Memorials are directed to the Cordova American Legion.

Mervin H. Henricksen was born to Levi L. Henricksen and Carrie M. Johnson Henricksen on November 29, 1921 at rural Cordova, NE, and passed away July 12, 2013 at Exeter Care Center in Exeter Ne at the age of 91. He was an only child. Mervin... View Obituary & Service Information

The family of Mervin H. Henricksen created this Life Tributes page to make it easy to share your memories.

Send flowers to the Henricksen family.