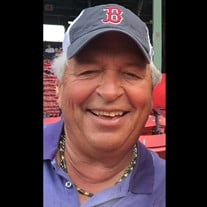 Michael A. Kempf, 65, resident of Shickley, Nebraska passed away on Monday, December 4th, 2017 in Geneva, Nebraska. Mike was born in Hebron, Nebraska on February 18, 1952 to Rowen J. and Lila L. (Hendrickson) Kempf. He was the oldest of three children in his family. He was baptized and confirmed at the United Methodist Church in Shickley. He went to Shickley Public School and graduated with the class of 1970. He went to the University of Nebraska in Lincoln and graduated in 1975 with a Bachelor’s degree in Agricultural Economics. After college he moved back to his hometown and joined his family in their farming operation. He was united in marriage to Jill Larson in November of 1976. From this union, two daughters were born, Mikaela Jean and Danielle Lee. His life centered around his girls. He adored watching them grow. He spent countless hours with his girls playing catch in the yard, teaching them to drive with the old Pontiac Bonneville, training the fair hogs, and showing them how to be amazing women. He loved the fair trips with his kids. In 1996, he was awarded the Honorary Chapter Farmer by the FFA. That year he and his brother helped escort two truck loads of hogs to the State Fair in Lincoln. He even helped chase loose hogs down the midway and out of the Clydesdale barn despite his dislike of horses. He was a dedicated sports enthusiast. He played Shickley fast pitch softball for many years and even brought home a state championship in 1982. He was extremely proud of his team and kept in touch with many of his teammates. He loved all sports but he especially enjoyed the events his kids, nieces, nephews, grandkids, grandnephews and grandnieces participated in. He loved to coach (yell) from the sidelines. At one district track meet, he was on his hands and knees, pounding the track, to encourage his daughter to run faster. He coached his girls in high school softball for six years. He found great pleasure watching his nephews play high school and college football. Of late, you would find him at the ballfield or school auditorium catching his grands in a game. His passion was farming. His eyes twinkled when he spoke about the enjoyment he found in farming with his family. He loved watching the crops grow, but he loved the harvest season the most. In September you would find him driving the combine in shorts and a tshirt (despite the weather), listening to the weather channel in the cab, and eating every last tootsie roll pop in the bag. He is survived by his parents, Rowen and Lila Kempf of Shickley; his daughters, Mikaela Eitzmann (husband, Chris) of Wellesley, Massachusetts, and Danielle Horwart (husband, Doyle) of Burnsville, Minnesota; siblings, Mark Kempf (wife, Janet) and Jody Heinrichs (husband, Steve) of Shickley; stepdaughters Wendy Vanskiver (husband Mark) and Elisabeth Heitmann (husband Jeremy); grandkids, Coen, Asher, Seth, Lila, Stella and Eli; many nieces, nephews, grandnieces, grandnephews and special friend Melodee Andersen. A Funeral Service for Michael was held on Saturday, December 9, 2017 at 10:30 a.m. the United Methodist Church in Shickley. Pastor Martin Leeper was the officiant. Stanley Johnson accompanied the congregation in the singing of “Precious Lord, Take My Hand,” “Lord, You Have Come To The Seashore,” and “In The Garden.” Pallbearers for the service included Chris Eitzmann , Doyle Horwart, Jesse Kempf, Jered Kempf, Cody Kempf, Greg Heinrichs, Coen Eitzmann, and Jay Kempf. Honorary Bearers included Asher Eitzmann, Seth Eitzmann, Lila Eitzmann, Wyatt Kempf, Axton Kempf, Blaine Kempf, Aydin Kempf, Luke Elting, Koy Elting, Kade Elting, Ella Williams, Crosbe Williams, Graeme Williams, and Lennie Jo Heinrichs. It was Mike’s wish to be cremated following the Funeral Service. Farmer and Son Funeral Home of Geneva directed the services. Online condolences may be left at www.farmerandsonfuneralhome.com. Memorials may be sent to the family for later designation.

Michael A. Kempf, 65, resident of Shickley, Nebraska passed away on Monday, December 4th, 2017 in Geneva, Nebraska. Mike was born in Hebron, Nebraska on February 18, 1952 to Rowen J. and Lila L. (Hendrickson) Kempf. He was the oldest of three... View Obituary & Service Information

The family of Michael A. Kempf created this Life Tributes page to make it easy to share your memories.

Michael A. Kempf, 65, resident of Shickley, Nebraska passed away...

Send flowers to the Kempf family.