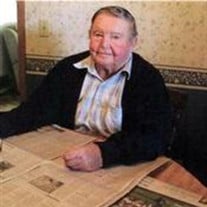 A Funeral Mass for Mike will be held on Friday, May 25, 2012 at 10:30 a.m. at St. Helena's Catholic Church in Grafton with Father William Holoubek officiating. Visitation will be held on Thursday from 1:00 p.m. to 5:00 p.m. at the Farmer & Son Funeral Home in Geneva. Rosary will be held at 7:00 p.m. at St. Helena's Catholic Church on Thursday. Memorials are directed to the family to be designated at a later date. Michael R. O’Brien was born to George L. O’Brien and Sara T. (Britt) O’Brien, on the 11th of May, 1931 on the land that his Irish grandfather John O’Brien homesteaded in Bennett Township, Fillmore County, Nebraska. His father passed away when Mike was six years old and he always revered his mother for being able to raise seven children in a fine manner in the 1930’s and 1940’s. Mike attended District 61 country school and graduated from Geneva High School in 1948. He played football and participated in track where he went to the State Track meet placing second in the mile event. He enjoyed all aspects of his life and dearly enjoyed his friends and making new friends. Within five minutes he would know where someone was from and what he or she did. After high school he took over the farming operation with his mother. He farmed until 1953 when he was called to serve in the United States Army. He took Basic Training and Leadership School at Fort Riley, Kansas. He was assigned to Korea, where he served in the 24th Infantry Division for more than a year and a half. He was Honorably Discharged with the rank of Tech Sargent in February of 1955. He then returned to farming until his retirement in 1994. Mike attended St. Helena’s Catholic Church in Grafton where he was baptized, confirmed and married. Mike married Donna Galusha of Fairmont on February 11, 1956 at St. Helena Catholic Church in Grafton, Nebraska. They enjoyed 56 years together. The union of Mike and Donna was blessed with six children: Dan, Kathryn, Teresa, Paul, Mark and Britt. In 1967, they built a new home on the farm for their family. In 1994, they moved to Fairmont. Mike still helped his sons Paul, Mark and Britt whenever he was needed and it was a great day when he was called on to do field work. He enjoyed all aspects of farming; helping his neighbors, raising livestock and seeing the crops grow to harvest. Mike was a lifetime member of the Veterans of Foreign Wars, Post Commander for four years and served as District #16 Commander of the V. F. W. He was also a fifty-year member of the Fairmont American Legion Post 21, where he served as Post Chaplain, and he served as County Legion Commander for eight years. Mike also joined the Knights of Columbus where he was the Grand Knight for 4 years. He was elected County Supervisor in 1970 and served for 16 years, two of which he was Chairman of Fillmore County Board of Supervisors. He represented Fillmore County on the Region V. Human Services Board, which provided care for mentally and physically handicapped individuals. Mike enjoyed telling Irish jokes and shared many with his numerous good friends. He was proud of his Irish Heritage. He looked forward every year to the annual O’Brien Reunion. He enjoyed doing things with his family and friends, trips to Vegas and the boats. He always said that going to school activities and coaching baseball with the sons and softball with the daughters were the most enjoyable years of his life. The final years were a challenge with his health problems, but he and Donna made the best of them. He was preceded in death by his parents, George & Sara O’Brien; a stillborn infant; sisters, Helen Jennett, Mary McCarthy, Kathleen Bender, baby sister Teresa O’Brien; brother, Lawrence O’Brien; mother and father-in-law, Edna and Don Galusha; brother-in-laws, Gayle Galusha, Eugene Jennett, Darrel Fessler and James McCarthy. He is survived by his wife Donna of Fairmont; children, Daniel M. O’Brien and wife Lois and their children, John Michael, Brock Daniel, Cosette Faith, Luke Jarrett, and Kara Joy Mincui: Kathryn A. Renning and husband David and their children, Jason Michael and Michelle Trudi; Teresa E. Anderson and husband Dale and children Brittany Ann and Shelby LeAnn; Paul G. O’Brien and special friend Nancy Chaney and her children, Jill, Kelsey, Paige, Austin and Cody; Mark D. O’Brien and wife Shaunna and their children Brielle Dawn and Ashton Nichole; Britt T. O’Brien; Tonia Stassines O’Brien and her children Kirstyn and Korbin Cowan. Also surviving are sister, Frances Fessler of Sutton, brother John O’Brien and wife Mary of Geneva, sisters-in-law, Nancy L. Galusha of Fairmont and Chris O’Brien of Yankton, S.D, Brothers-in-law, George Bender; brother-in-law, Del Galusha and wife Jan of Fairmont; and many nieces and nephews, other relatives and a host of dear friends.

A Funeral Mass for Mike will be held on Friday, May 25, 2012 at 10:30 a.m. at St. Helena's Catholic Church in Grafton with Father William Holoubek officiating. Visitation will be held on Thursday from 1:00 p.m. to 5:00 p.m. at the Farmer... View Obituary & Service Information

The family of Michael R. O'Brien created this Life Tributes page to make it easy to share your memories.

Send flowers to the O'Brien family.