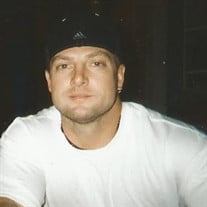 Funeral services for Micky will be held on Wednesday, February 4, 2015 at 10:30 AM and Emmanuel Lutheran Church in York, NE with Pastor Ben Kaiser & Pastor Mike Neidow officiating. Private family visitation. Graveside services will be conducted at the Greenwood Cemetery in York, NE. Memorials are to be directed to the family for a later designation. Micky James Edmunds, born in York, NE, August 12, 1974, entered into eternal peace on January 28, 2015 in Thatcher, AZ. He was welcomed into heaven by his precious nephew, Kaden James Lage, aunt Jackie Kaiser, grandfather James Kaiser & Paul Marley and great-grandparents Erwin & Florence Light and August & Emma Kaiser. Left to keep his memory alive are his parents, Terry Edmunds and LouAnn Bieck. Granny & Grandad, Les & Rowena Batterton; grandparents, Betty (John) Seilhan, Charles (Mary) Edmunds; brother, T.J. Edmunds and sister, Melissa (Trent) Lage and his beloved nieces and nephew, Maelin, Renna and Seger Lage; aunt, Sherri who he endearingly called “Dewy” (Moe) Scott; his special-friend, Deena Churchhill and her son, Gabe. Mick will also be forever remembered by numerous aunts, uncles, cousins, extended family and dear friends. He graduated from York High School in 1992 and from Southeast Community College/Milford with an Associates degree. His passion for music and motorcycles brought him great joy in life. He was a son, brother, grandson, nephew and his favorite title, Uncle that was loved dearly by his family, who always remains hopeful. Their faith in God sustained them in their hope, just as it still does. As we now know Mick has found the true peace he was searching for in this life.

The family of Micky J. Edmunds created this Life Tributes page to make it easy to share your memories.

Funeral services for Micky will be held on Wednesday, February...

Send flowers to the Edmunds family.