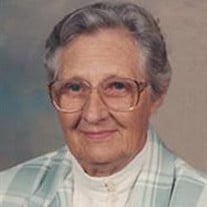 Mildred J. Fischer was born June 19,1924 at Wisner Nebraska to Walter and Amelia (Strumpler) Werner and passed away at Hastings, Nebraska on Wednesday, July 30, 2014, at the age of 90 years, 1 month and 11 days. She was on of six children in the family. Mildred was confirmed at the Trinity Lutheran church in Friedensaw, Nebraska. Millie graduated from the Hebron High School and then worked at a variety of job including the Deshler Broom factory in Deshler, Nebraska. On May 9, 1948 she was united in marriage to Herman Ludwig Fischer at the Lutheran Church in Hebron, Nebraska. They lived on the family farm near Deshler, Nebraska. They had a son James and a daughter Cheryl. Her life on the farm was filled with being a wife, mother, farmhand, cook along with various other activities. Millie was a member of a women’s club, her hobbies included softball, bowling and the famous Werner pastime, card playing. She was preceded in death by husband Herman Fischer, daughter Cheryl Monteford, grandson Jeremy Fischer, Four brothers Wally, Eugene, Doyle and Edward, a sister Shirley. She is survived by a son James and wife Cathy of Hastings, NE, son-in-law, Bill Mountford of Ong, NE, sisters, Lorna Waldmeier of Beatrice, NE, Burndean Juedes of Omaha, NE, by 2 grandchildren, 3 step grandchildren, 2 great grandchildren and 6 step grandchildren. Funeral services were conducted from the Zion Lutheran Church on Tuesday, August 5, 2014 with Pastor James Moll officiating. Stanley Johnson accompanied the congregation who sang How Great Thou Art and Amazing Grace. Casket bearers were Dale Werner, Jerald Judes Tom Priefert, Lyle Werner, Mark Fintel and Scott Werner. Honorary casket bearers were John Fischer, Doug Mountford, Bob Anderson, Jerry Shuck, Robert Fischer and Jerry Lobeda. Interment was in the Ong Cemetery with Farmer & Son Funeral Home in charge of arrangements, Memorials are directed to the Zion Lutheran Church.

Mildred J. Fischer was born June 19,1924 at Wisner Nebraska to Walter and Amelia (Strumpler) Werner and passed away at Hastings, Nebraska on Wednesday, July 30, 2014, at the age of 90 years, 1 month and 11 days. She was on of six children in... View Obituary & Service Information

The family of Mildred "Millie" Fischer created this Life Tributes page to make it easy to share your memories.

Send flowers to the Fischer family.