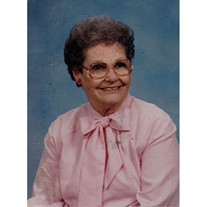 Mildred M. Leenerts, 95, passed away on Wednesday, September 30, 2015 at Heritage Crossings in Geneva, Nebraska where she had been a resident for the last 5 years. Mildred was born near Ohiowa, Nebraska on April 21, 1920 to Guy and Clarice (Overhalser) Christiancy, and lived in the Bruning and Geneva area for her entire life. She graduated from Bruning High School in 1937, and was married to Raymond Leenerts, who preceded her in death in 1964. Mildred enjoyed baking cookies and caring for children. She created and baked cookies for the community of Bruning for many years. She provided “grandmotherly” child care for a number of children and families of that same area. She had an extensive cookie jar and cookbook collection, filling cookie jars with her baking, and reading cookbooks like they were novels. Following her husband’s passing, Mildred attended Lincoln Business School in Lincoln, Nebraska graduating from there and beginning work as a bookkeeper at NAPA Auto Supply in Hebron, Nebraska She was employed there for 20 years. After her retirement, she kept active caring for children in her home. Mildred moved to Heritage Crossings in Geneva on November 2, 2010 and was a resident there until her death. Mildred was preceded in death by her parents; Guy and Clarice Christiancy; her husband, Raymond; and her brother, Floyd Christiancy. She is survived by her daughter Marjorie (Larry) Biehl of Tucson, AZ; son Gayle (Genevieve) of Omaha, NE; grandchildren Lorri (Harley) Puckett of Tucson, Kelley Schmidt, Minneapolis, MN, Benjamin (Michelle) Leenerts, Papillion, NE, and James Leenerts of Omaha, NE; three great-grandchildren; and her sister Marie Lowe, of Salina, KS. Funeral services for Mildred were held on Monday, October 5, 2015 at 10:30 a.m. at the Trinity Lutheran Church in Bruning with Pastor Stuart Sell officiating. Janice Fintel accompanied the congregation in the singing of “Amazing Grace,” “How Great Thou Art,” and “Precious Lord, Take My Hand.” Pallbearers for the service included Tim Remmers, Mark Hinrichs, Dave Messman, Clint Werner, Dave Bruning, Lloyd Bartels, and Fred Bruning. Honorary bearers were Evan Remmers, Ashley Hinrichs, Zoey Messman, Brianna Werner, Brady Werner, Kristen Bruning, Tammi Bartels, Andrea Bartels, and Abby Bruning. Interment was held in the Trinity Lutheran Cemetery. Farmer & Son Funeral Home conducted the services. Memorials are directed to Heritage Crossings in Geneva. Online condolences may be left at www.farmerandsonfuneralhome.com.

Mildred M. Leenerts, 95, passed away on Wednesday, September 30, 2015 at Heritage Crossings in Geneva, Nebraska where she had been a resident for the last 5 years. Mildred was born near Ohiowa, Nebraska on April 21, 1920 to Guy and Clarice... View Obituary & Service Information

The family of Mildred M. Leenerts created this Life Tributes page to make it easy to share your memories.

Send flowers to the Leenerts family.