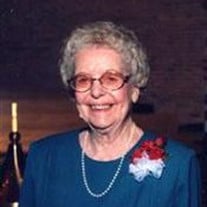 Mildred Elaine Ogg Weinerth was born on December 4, 1912. She was the seventh of 12 children born to Charles Claude Ogg and Clara Ethel Voightlander. She was born in Geneva, Fillmore, Nebraska. She lived with her parents and siblings and began school in Chelsea Township, Fillmore County, Nebraska and went to high school in Geneva Nebraska. She was married to Emil Krause on April 17, 1929 and lived in Bennet Township. Two sons were born to this union, James W Krause March 18, 1933 and Donald L Krause November 17, 1938. Following a period of separation Emil and Elaine were divorced on January 23, 1942. She moved to Missouri near her oldest sister and worked as a waitress. She then moved into St. Louis and continued waitress work. During the second world war she worked at Curtis Wright airplane company. On August 18, 1947 she married Laurence Weinerth and shortly after that they moved out into the Jennings area and built a house. She still worked part-time as a waitress in Clayton Missouri. When Lawrence retired they moved to Shickley Nebraska where they bought a home. In November 1995 they had an automobile accident in which Lawrence died of his injuries. Elaine continued to live in Shickley until she went to live with her son Donald and his wife Arlene in St. Charles Missouri. In November 2012 about a month before her 100th birthday she fell and broke her hip. The hip was repaired and she was sent to a nursing home where she resided until her death on September 19, 2013. On her 100th birthday her two sons and a daughter-in-law and all her grandchildren as well as some great grandchildren and great great grandchildren came to help her celebrate. She is predeceased by her parents Charles Claude Ogg and Clara Ethel Voightlander Ogg, all of her siblings, her husband Lawrence, a daughter-in-law Elizabeth Jean Graves Krause and grand daughter Brenda Lynn Krause. She is survived by her two sons James of Milk River Alberta and Donald (Arlene) Krause of St. Charles County Missouri, 6 grandchildren Michelle (Mike) Pulsifer of Raymond Alberta, Mike (Phyllis) Krause of St. Charles County Missouri, Marcie (Jay) Eagleson of Marshall Saskatchewan, Mindy Prunkle of Milk River Alberta, Tracey (Jeremy) Tharp of St. Peter Missouri and Todd Krause of St Peter Missouri, 16 great grandchildren, 19 great great grandchildren and one great great great grandchild, Nieces and Nephews, which made her the oldest living member of a six generation family. Funeral services will be 10 a.m., Friday, October 4, 2013, at the Farmer & Son Funeral Home in Geneva. Visitation will be Thursday from 3 p.m. until 8 p.m. at the Farmer & Son Funeral Home. Burial will be in the Geneva Public Cemetery. Memorials are in care of the family.

Mildred Elaine Ogg Weinerth was born on December 4, 1912. She was the seventh of 12 children born to Charles Claude Ogg and Clara Ethel Voightlander. She was born in Geneva, Fillmore, Nebraska. She lived with her parents and siblings and began... View Obituary & Service Information

The family of Mildred Elaine Weinerth created this Life Tributes page to make it easy to share your memories.

Send flowers to the Weinerth family.