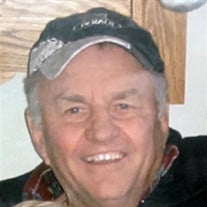 A Memorial Service for Myron was held on Thursday, January 2, 2020, at 2:00 p.m., at the Saline Center Hall with Justin Pekarek presiding. There were 3 recorded selections played for Myron's service and they were, "Daddy Never Was The Cadillac Kind" by Confederate Railroad, "Till I'm Too Old To Die Young" by Moe Brandy and "Grandpa" by The Judds Honorary Urn Bearers included Seth Keller, Zack Keller, Logan Hayek, Rylee Hayek, Kaylee Hayek, Collin Hayek, Cooper Hayek, Jordan Jurgens, Jake Sykes, Zack Clausen, Dan Slepicka and Roayn Clausen. Private Family Burial of Ashes will be held at a date. Memorials were directed to the family to be designated at a later date. Farmer & Son Funeral Home was in charge of funeral arrangements. Myron “Peanuts” Lumir Hayek was born May 5, 1944 in Friend, Nebraska, to Lumir and Evelyn (Vlasak) Hayek and passed away December 28, 2019 at the age of 75 years. He attended Country School Districts 51 and 84, which then consolidated with District 78 where he graduated from in the 8th grade. He then attended high school in Wilber and worked part time at Kassik Milling during his senior year before graduating from Wilber High School with the class of 1962. After high school he served 6 years in the Army National Guard from 1965 to 1971. During his childhood years, Myron spent many years along with his family living at and, operating, Halfway Station on the corner of Highways 15 and 41 from the years of 1954 to 1968. Many, many great memories were made at Halfway by friends, family, and acquaintances throughout the years and are still talked about today. Although Halfway was torn down in 1968 to improve Highway 15, the intersection of Highway 15 and Highway 41 east, is still called Halfway by the locals to this day. He was united in marriage to Karen Ann Kotas on March 8, 1969. Myron worked at Saline County Equipment near Crete before he and Karen moved to the farm west of Wilber and took over the family farm in 1971, where they resided until retiring in 2002 and moving to their current home near Milligan. Myron and Karen farmed side-by-side making their living raising corn, beans, milo, wheat, cattle, hogs, and 3 kids. Myron enjoyed hunting, fishing, playing cards with friends and family, evening cruises, old tractors, collecting farm literature, helping his sons on the harvest run, and was “The King of Weenie Roasts!!” He was an active member at Saline Center Hall and enjoyed volunteering at the Hall. He is survived by his wife, Karen of 50 years, daughter, Wendy and Darin Keller, sons, Doug and Hillary Hayek, and Daryl and Roxy Hayek; Grandchildren, Seth and Zack Keller, Logan and Rylee Hayek, Kaylee, Collin and Cooper Hayek, and Great Grandchild, Roayn Lann Clausen; Sister, Marva Hayek Kasl and husband Bob; Brothers-in-laws, Gerald Kotas and wife Lois, Melvin Kotas and wife Barb, and Sister-in-law, Carol Kotas and many nephews, nieces, relatives and friends. He is preceded in death by his parents, Lumir and Evelyn Hayek; Parent in laws, Frank and Sylvia Zoubek Kotas; Brother-in-law, Roger Kotas; Nephews, Bobby and Brad Kasl and Niece, Jean Kasl Essman.

A Memorial Service for Myron was held on Thursday, January 2, 2020, at 2:00 p.m., at the Saline Center Hall with Justin Pekarek presiding. There were 3 recorded selections played for Myron's service and they were, "Daddy Never Was The Cadillac... View Obituary & Service Information

The family of Myron L. Hayek created this Life Tributes page to make it easy to share your memories.

A Memorial Service for Myron was held on Thursday, January 2,...