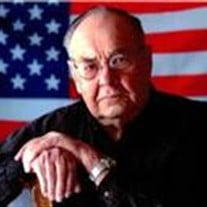 Funeral services for Myron will be held on Friday, December 27, 2013 at 10:30 a.m. at the United Church of Christ in Exeter. Rev. Kenneth Leischner will officiate the service. Military graveside services will follow the funeral in the Exeter Cemetery. Visitation will be held on Thursday from 1:00 p.m. to 8:00 p.m. at the Farmer Funeral Home in Exeter. Family will greet friends from 5-7 p.m. at the Funeral Home. Memorials are directed to the Exeter American Legion Post 218 or the United Church of Christ in Exeter. Myron Joseph Schiefelbein, 90, passed away December 21 ,2013 in Lincoln, Nebraska . Myron was born April 16, 1923 on a farmstead near Juniata, Nebraska to John and Agnes (Gerten) Schiefelbein. He was the second born in a family of 10 children. In 1942 he graduated from Roseland High School and married Maxine (Ernst) of Kenesaw, Nebraska December 30, 1948. Myron served in the U.S. Army from Jan. 1949 thru 1953. He served with the IX Corps, Red Bull Battalion, 987th Field Artillery in Korea with the Ohio National Guard. As a Corporal in Korea he saw active duty and was wounded in March of 1951 being awarded the Korean Service Medal with two Bronze Service Stars. Upon his return home from the service he moved to the Friend area where he raised German Shepherd dogs and worked as a truck driver and mechanic for Diamond Freightways and Graves truck line. Myron and Maxine’s 3 children, Dan, Nancy and Tommy were born and raised in Friend. The family moved to Exeter in 1976. Myron and Maxine, owned and operated the Shuffle Inn Tavern and café, and worked as a Government grain sampler at the Exeter Co-op. Myron never really retired always working as a handyman and hobbyist. Through the years he enjoyed hunting with his sons, fishing, tinkering with old cars, woodworking, playing cards and following his grandchildren’s sports and activities. Myron and wife Maxine moved to Lincoln in 2010 to be closer to family. This past October Myron was among 150 Korean War Veterans to make the Korean Veteran Honor Flight to Washington D.C.. They viewed the War Memorials, Lincoln Memorial, and Tomb of the Unknown Soldier. The Korean Memorial was viewed once during the day and again at sunset. They returned home to the fanfare of the Legion band, cheering friends and families. He is survived by his wife of 64 years, Maxine, children and spouses, Dan and Darla Schiefelbein (Columbus, NE), Nancy and Roger Bruner of (Lincoln, NE) ,grandchildren Erin and Jeff Eickhoff,(Albion, NE) Adam and Courtney Stottler(Alma, NE) ,Jack and Joseph Bruner (Lincoln, NE), and 3 great grandchildren. Myron is also survived by sisters Virginia Trausch (Roseland NE) Mary Ellen and Ronnie Meyer (Aurora IL), brother John and Wauneta Schiefelbein (Hastings NE), sisters-in-law Mary Lou Schiefelbein (Boise, ID) and Sue Schiefelbein (Troy, MO) Myron was preceded in death by his parents, son Tom and Tom's daughter Natasha, sister’s and spouses Verena and Ed Paluska, Johanna and Paul Utecht , Julie and Ronnie Utecht, brother Ed, Denny, Jerome and wife Ramona, and brother –in –law Mike Trausch.

Funeral services for Myron will be held on Friday, December 27, 2013 at 10:30 a.m. at the United Church of Christ in Exeter. Rev. Kenneth Leischner will officiate the service. Military graveside services will follow the funeral in... View Obituary & Service Information

The family of Myron J. Schiefelbein created this Life Tributes page to make it easy to share your memories.

Funeral services for Myron will be held on Friday, December 27,...

Send flowers to the Schiefelbein family.