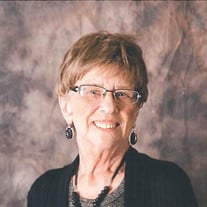 A Private Family Funeral Service was conducted on Saturday, April 11, 2020 at Farmer & Son Funeral Home in Geneva, Nebraska with Rev. Rayl Robbins presiding. There were 3 recorded music selections for Nancy’s funeral service, “Amazing Grace” by The Violin Sisters, “I Can Only Imagine” by Mercy Me and “Can’t Help Falling In Love” by Elvis Presley. Graveside Services were conducted at the Fairmont Public Cemetery. Memorials were directed to the family to be designated at a later date. Farmer & Son Funeral Home was in charge of funeral arrangements. Nancy Louise Galaway of Fairmont, Nebraska, was born February 22, 1945 at Blair, Nebraska to Guy and Charlotte (Baker) Stricklett and died April 7, 2020 at Geneva, Nebraska, at the age of 75 years 1 month and 16 days. Nancy grew up in Blair, and on February 2, 1963 she married Charles Berggren in Blair. To this union three children were born-- Shelly, Susan and Ken. The couple moved to a farm near Lindsay, Nebraska. In the fall of 1964 the couple and their daughter, Shelly, moved to Fairmont, Nebraska where Susan and Ken were born. The family was devastated when on July 29, 1966, Charles and Nancy’s second daughter, Susan, passed away. The family was again drawn closer in grief when Charles passed away on September 27, 1986. Nancy married Joe Galaway on September 19, 1992 in Fairmont. To this marriage Joe brought two daughters and five grandchildren. Nancy’s life centered on her family, friends and community. Over the years, besides doing babysitting, she worked outside the home at the Tower Cafe and Stockman’s Club, was a cook at the Fairmont school and for ten years, and she sold for House of Lloyd. Nancy’s three granddaughters, Joni, Abbie and Jenna Cassidy stayed with her while their parents were at work. Nancy felt so very blessed to share this time with them. Nancy enjoyed working in organizations to benefit Fairmont. She was a member of the Fairmont Community Church and United Methodist Women since 1964, serving on several committees for the Church and President of UMW. She was a member of the Fairmont Federated Woman’s Club since 1966, serving in different offices and chairmanships including club president, district president and state 2nd vice president, she was a member of the Fairmont American Legion Auxiliary since 1990, and was a member of the Fairmont Ladies Bible Study. She was member of the Fairview Manor Auxiliary and enjoyed making personalized birthday cards for the residents. In the fall of 1991, Nancy was a part of the group that organized the Fairmont Recycling where she volunteered for many years. She had also served as Girl Scout Brownie leader and was a member of the Chamber of Commerce for many years. She worked on preserving the history of Fairmont and its people, working on the 125th Fairmont History Book, Fairmont Cemetery Book and compiling genealogy and histories of the people. She was also a huge supporter of the Relay for Life, and raised money for the event for the last 3 years. Nancy enjoyed attending the social groups, Pricilla’s, A Birthday Club and the Senior Center. Nancy enjoyed having coffee with friends, tracing the family history and writing short stories and poetry. Her favorite time of year was Christmas. She loved decorating the house, sending and receiving Christmas cards from friends and relatives, preparing for family get togethers and shopping for that special gift for those she held so dear. Nancy is survived by her husband, Joe, her two children, daughter and son-in-law, Shelly and Dave Cassidy of Fairmont and son and daughter-in-law, Ken and Linda Berggren of Unityville, PA; two step daughters, Susan Schulz of York and Nancy Galaway of Lincoln; eight grandchildren, Joni and Rachelle Cassidy and children Knox and Zoey of Norfolk, Abbie Cassidy and husband Clayton Dishong of Shickley, and Jenna Cassidy and David Tuberville and their son Arlo of Henderson ; Sara Schulz and husband Jake Schall and sons Kyson and Kemper, Shaina Shultz and her son Jerrick; Joshua and Jared Schulz all of York; Jordan Galaway of Lincoln; a step grandson, Jason Huff of Pennsylvania and three great step grandchildren, Alex and Lilly Huff and Lakota Tuberville; a sister and brother in law Judy and Don Magill, of Tekamah; brother-in-law Milton Berggren, of Stanton and a host of other relatives and friends. She was preceded in death by her parents, husband Charles Berggren, daughter Susan Berggren, nephew Dan Magill, brother-in law Vernon Berggren, and brother-in-law Norman Berggren.

The family of Nancy L. Galaway created this Life Tributes page to make it easy to share your memories.

A Private Family Funeral Service was conducted on Saturday, April...

Send flowers to the Galaway family.