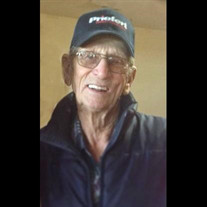 Neil E. Priefert passed away at the Fairview Manor in Fairmont, Nebraska on January 27, 2019 at the age of 89 years, 9 months and 3 days. He was born on the South Place, west of Fairmont, Nebraska on April 24, 1929 to Elmer G. and Margaret E. (Boren) Priefert. He attended two different country schools near the farm and graduated from Fairmont High School in 1947. Neil met Jean Bernasek at “Ye Old Corral” roller skating rink in Geneva and they were married September 5, 1954 at Geneva’s United Brethern Church. Neil and Jean were married for 63 years. Four daughters; Mary, Carol, Linda and Susan, made this family complete. Neil made his decision to farm and care for the land when his dad offered college funds or a tractor to Neil and his two sisters. His sisters went to college and Neil chose the tractor. Neil served in the National Guard with his unit being called into active stateside duty in 1955 at Ft. Benjamin Harrison in Indianapolis, Indiana. He was then stationed at Ft. Riley in Junction City, Kansas. In the 1960’s it was guard buddies and their families that would come spend the weekend at the farm for ‘personal guided pheasant hunts’. The registered Polled Hereford herd began with animals purchased on a farm sale. At the time, the number of cows were dependent upon what would fit on the 40 acres of pasture on the home place. Of course, the pasture first had to provide for the 4 milk cows that were standard farm features in the 50’s. As with many young farm families, gifts are farm oriented. The young couple received a monetary gift from her parents for a clothes washer. Instead of a washer, this couple bought a cow. The year was 1957. Social activities in West Blue Township in those days consisted of neighborhood card parties with plenty of snacks, conversation and laughter. The girls learned to dance on Neil’s shoes at the Milligan Auditorium to the tunes played by Leonard Becwar’s band. Sunday dinner guests weren’t relatives, they were the field men for the Polled Hereford World. Family vacation destinations were not theme parks or the beach, it was wherever the tour was that year in Nebraska or Kansas. Women and kids in one vehicle, dads in another. (Looking back upon that arrangement, it was only Neil that got a vacation.) When the fences needed painting and the yard needed to be spruced up, there would be no vacation, it was time to host a tour stop. Neil and his family made many enduring friendships through these networks, with the family circle extending to include the Kansas cousins. Neil served as an assistant 4-H leader when the girls were active in “Keep ‘Em Growing” 4-H club, and he actively supported his daughters as they traveled with the judging teams, showing 4-H calves at area events and Junior Nationals around the country. He served on the Fairmont Co-op Board, Fillmore County Noxious Weed Board for 30 years, and the Nebraska Polled Hereford Association, serving as a Director and Vice-President on the board for many years. He was a member of the Nebraska Hereford Association and Exeter Feeders and Breeders Association, serving on its board as well. He was a member of the Fairmont Community Church, making certain the girls got to Sunday School and sang in Nancy Jo’s children’s choir when it was known as Grace Methodist Church. He was also a member of the Fairmont American Legion. Neil was preceded in death by his parents; sister Vivienne Loge; and brother-in-law Robert D. Baker. He is survived by his wife, Jean of Fairmont, daughters Mary (Dana) Scott of York, Carol (David) Priefert Wentworth of Chicago, Illinois, Linda (Kirby) Zuerlein of Fairmont, Susan (Brandon) Priefert Voss of Sisters, Oregon; grandchildren Zac (Amanda) Scott of York, Nick (Kelsey) Scott of Norfolk, Ryan (Sarah Stearns) Scott of York, Adam (Anna) Scott of Lincoln, Curt (Sydney) Scott of Gretna, Lindsay Carroll of Lincoln, Danielle (Dakota) Cooper of York, and Leslie Carroll of Fairmont; great- grandchildren, Hudson and Wyatt Scott, Dominic, Derrick & Dusty Cooper, Ethan Dodson, and Jane Scott; sister Wilma Baker of Norfolk; and nieces, nephew and friends. A Funeral Service for Neil was held on Friday, February 1, 2019 at 1:30 p.m. at the Fairmont Community Church in Fairmont, Nebraska. Pastor Pat Norris officiated the service. Gwenda Mau accompanied the congregation in the singing of “Great Is Thy Faithfulness” and “It is Well With My Soul.” The recorded selection “Can I Have This Dance” was played as the recessional. Pallbearers for the service included Zach Scott, Nick Scott, Ryan Scott, Adam Scott, Curtis Scott, and Rich Baker. Interment was held in the Fairmont Public Cemetery following the Funeral Service and the Fairmont American Legion Post 21 provided Military Honors. Farmer & Son Funeral Home was in care of the arrangements and online condolences can be left at www.farmerandsonfuneralhome.com Memorials are suggested to the Fairmont Community Church or the Nebraska Junior Hereford Association.

The family of Neil E. Priefert created this Life Tributes page to make it easy to share your memories.

Neil E. Priefert passed away at the Fairview Manor in Fairmont,...

Send flowers to the Priefert family.