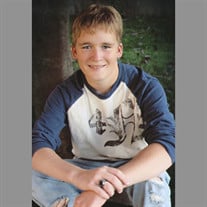 Nicholas Ray Scheil of Fairmont was born to Michael Ray Scheil and Tamara Jo Schweitzer Scheil on January 24th, 1992 at Geneva, Nebraska and passed away on June 22nd, 2015 at Fillmore County Hopsital in Geneva at the age of 23 years, 4 months and 28 Days. He was the oldest of the four children. Life was challenging from the day he was born. Nick was born with a Congenital Heart Defect and had his first heart surgery at four days old. This was the beginning of many trips to Children's Hospital in Omaha and several more surgeries. Nick struggled with heart issues his whole life, but the lack of a strong heart didn't mean he was weak in heart. He showed more heart in 23 years than some do in a life time. Nick was always a friend to everyone, and really never met a stranger. Nick was dedicated as a baby and made the choice to be baptized into his faith on July 18th, 2004. Nick attended the Evangelical Free Church for the majority of his life. He graduated from Fillmore Central High School with the Class of 2010. After high school, he attended Central Community College in Hastings for one year, and then Central Community College in Grand Island and received his Electrical Apprentice License. Nick pursued many different jobs over the years, collecting good friends along the way. His friends were one of his biggest joys in his life. He was always looking for 'someone' to hang with. He cherished his friends and would never turn down a good video game session even if it meant he had to haul his game system and TV with him. Nick was full of love and showed it to all around. He had the most contagious smile; from the time he was born it was there. One look at Nick and he would have you smiling right along with him. He never thought badly about anyone and always could look past things that would stop most of us from getting to know someone well. He will be greatly missed by his many friends. Nick enjoyed spending time with family and had a deep love for them. Many memories were made on camping trips, fishing, hunting, and at family gatherings. His caring heart and the compassion he showed to others will be greatly missed. Nick was preceded in death by two aunts, Donna Scheil and Deb Davis, and a cousin, Jeremy Davis. Left to feel his loss are his Parents, Mike and Tami Scheil of Fairmont; Brothers, Nathan of San Diego, California and Kaleb of Fairmont; Sister McKenzie of Fairmont; Grandparents Charlie and Sandy Scheil of Fairmont and Clint and Marilyn Schweitzer of Geneva; Uncles, Aunts, Cousins and Many Friends . Funeral Services for Nick were held at 10:30 a.m. on Friday, June 26th, 2015 at the Evangelical Free Church in Geneva, NE with Pastor Jeff Jensen officiating. Recorded music for the service was played and consisted of “Dancing With The Angels,” “Come As You Are,” and “Be On My Way.” Pallbearers for the service included Nathan Scheil, Kaleb Scheil, Dan Scheil, Doug Scheil, Mark Scheil, and Zach Scheil. Burial was held following the funeral service at the Fairmont Public Cemetery. Farmer & Son Funeral Home conducted the services. Memorials are directed to the family for later designation.

Nicholas Ray Scheil of Fairmont was born to Michael Ray Scheil and Tamara Jo Schweitzer Scheil on January 24th, 1992 at Geneva, Nebraska and passed away on June 22nd, 2015 at Fillmore County Hopsital in Geneva at the age of 23 years, 4 months... View Obituary & Service Information

The family of Nicholas R. Scheil created this Life Tributes page to make it easy to share your memories.

Send flowers to the Scheil family.