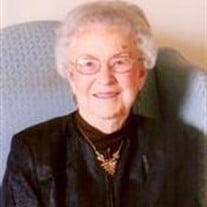 Nona Imogene (Usher) Shaner was born to John Hudson “Hud” Usher and Anna Dodds Usher on December 11, 1918 at Fairmont NE., and passed away on June 16, 2012 at Heritage Crossings in Geneva NE at the age of 93 years 6 months and 5 days. She was the youngest of four children in the family. Nona was a child of the Great Depression. She lived her whole life in Fillmore County. Nona and Marie Moul Plettner were friends forever being put in the same crib at gatherings. They were even potty trained side by side in the same out house. In her youth Nona was a member of the Federated Church in Fairmont NE, and sang in the church choir. She attended school and graduated from Fairmont High School in 1936. When Nona was 16 she went to visit her aunt in California for the summer. She spent a lot of time at the beach with her cousins and their best friend, who she later found out was Jason Robards. In the summer of 1936 Nona was chosen Miss Fairmont. She participated for 3 days in Lincoln to choose Miss Nebraska. Nona met Rex Shaner at a dance in Fairmont. There were united in marriage November 29, 1936 and to them three daughters were born. Nona loved to shop. Her girls always said if Nona were ever on a hi-jacked plane to Cuba she would have asked the hijackers if she would have time to shop there. Nona loved to eat onions. It wasn’t unusual for her to have an onion sandwich for a snack. Nona was a wonderful cook. She could make an amazing beef roast and brown gravy. Her sons –in-law said it was worth the drive from Lincoln to have that meal. Nona enjoyed sewing and quilt piecing. She and her daughters traveled Nebraska and parts of Iowa and Kansas to visit quilt shops. She liked to travel and enjoyed fishing in northern Minnesota with family and friends. Nona was proudest of her role as wife, mother and grandmother. She looked forward to school vacations so that the girls would be home and they could have fun. Nona had a terrific sense of humor. She would throw back her head and laugh and giggle. She could throw out one line zingers with a straight face. Nona was a member of the Campfire Girls and a Girl Scout leader. She was a member of the Eastern Star, a member of the United Methodist Church and United Methodist Women, she also taught Sunday school. She belonged to Kensington and several bridge groups. Nona was preceded in death by her parents, her Husband Rex Brother Monroe H Usher her sisters Edith Usher and Ruth Olsen, Nephew Monroe H Usher Junior and grandson Robert Oliva. She is survived by daughters and son-in-laws Peggy and Dick Oliva of Geneva, Joann (Jody) and Jim Melton of Lincoln, Barbara and Roger Rietsch of Lincoln, Grandchildren Rich and Charity Oliva of Fremont NE, James Melton Jr. of Longmont CO. Jen Melton of Lincoln, Sara (Rietsch) and Terry Wiedenfild of Sioux City IA, Great grand children Kayla Bennett of Omaha, Courtney Oliva & Fiancée Wade DeVries of Omaha, Haley, Harley and Haven Larson of Fremont, Great great grand children Caine Michael Bennett of Omaha, Cooper Dean DeVries of Omaha. And many Nieces and Nephews. Services for Nona will be Thursday, June 21, 2012 at 10:30 a.m. at the United Methodist Church in Geneva, Nebraska. Burial will be in the Geneva Public Cemetery. Public visitation will begin Wednesday at 1:00 p.m. until 8:00 p.m. with family greeting friends from 6:00 until 8:00. Memorials are directed to the United Methodist Church.

The family of Nona I. Shaner created this Life Tributes page to make it easy to share your memories.

Send flowers to the Shaner family.