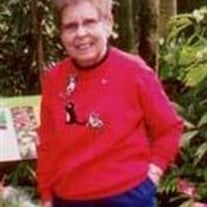 Memorial services for Norma will be on Monday, March 26, 2012 at 10:30 a.m. at the Evangelical Free Church in Geneva with Pastor Jeff Jensen officiating. Memorials are in lieu of flowers to be directed to the Geneva Senior Center, the Fillmore County Hospital Auxiliary, or the Evangelical Free Church. Norma Jean Babst was born on April 27, 1934 to Albie (Vrbsky) and Elmer Babst at the family home in Geneva, Nebraska, and she passed away on March 20, 2012, at Heritage Crossings Nursing Home in Geneva at the age of 77 years, 10 months and 23 days. She was one of two children born in the family Norma attended school in Geneva and graduated with the class of 1952. She said she had a very happy childhood growing up. She liked living in town where she could go to ball games and find other things to do. She often would go with her Dad to Lincoln. The family always planted a big garden and then they would put the produce in their wagon to sell to their neighbors. Norma’s first job was working for the Eller’s Department Store in Geneva. Later, she worked for Cartwright’s T.V. and also for the Thomas Hardware Store. There was a time that she was needed to help care for her mother who suffered from rheumatoid arthritis. The job she enjoyed the most and stayed at the longest, however, was working for the ASCS office in Geneva. She was employed there for 30 years and saw many changes in the farm programs over the years. After retirement, Norma kept herself busy baking cookies for family and friends. She delivered “Meals On Wheels” for years and found that to be very rewarding. When she could no longer do this, she began volunteering at the Senior Center, as well as keeping busy with her church activities at the Evangelical Free Church. She took quite a few bus trips with the Ambassador Club after retirement. Norma also traveled with her brother who delivered motor homes all over the United States. Another pleasure for her was to care for dogs while their owners were away. Norma’s hobbies included crocheting, knitting, and embroidery. She enjoyed taking care of her home, being a member of the Beta Sigma Phi Sorority, bowling on a bowling league, and visiting with many close friends here in Geneva. Her greatest source of enjoyment was the time she spent with her 3 nephews and their families. Norma was preceded in death by her parents, Elmer & Albie (Vrbsky) Babst. She is survived by her brother and sister-in-law, Dick & Faye Babst of Columbus, NE; her nephews and their sons Doug and wife Stacy and Jackson and Ben of Round Hill, VA, Mike and wife Rocio and Jonathan and Daniel of Homestead, FL, and Greg and wife Niki and Kyle, Calvin and Quentin of Wahoo, NE.

Memorial services for Norma will be on Monday, March 26, 2012 at 10:30 a.m. at the Evangelical Free Church in Geneva with Pastor Jeff Jensen officiating. Memorials are in lieu of flowers to be directed to the Geneva Senior Center, the... View Obituary & Service Information

The family of Norma J. Babst created this Life Tributes page to make it easy to share your memories.

Send flowers to the Babst family.