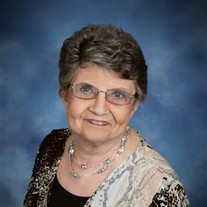 A Funeral Service for Faye was held on Monday, October 21, 2019, at 10:30 a.m., at the United Methodist Church in Geneva, Nebraska with Pastor Doug Griger presiding. Pianist, Melissa Houchin, accompanied the congregation as they sang the hymn, “In The Garden” for Faye’s service. There was also a special music selection played for Faye as the family exited the church, “Fight Song” by Rachel Platten. Casket Bearers included Brian Bonin, Kyle Bonin, Cody Simonton, Mike Iverson, Rich Engel and Todd Simacek. Graveside Services were conducted at the Grafton Public Cemetery following the funeral service. Memorials were directed to the family to be designated at a later date. Farmer & Son Funeral Home was in charge of funeral arrangements. Norma Faye Bonin was born to Clinton Ford Simonton and Sadie Marie (Rentschler) Simonton on March 25, 1938 in Santa Ana, CA, and passed away on October 16, 2019 at the Fillmore County Hospital in Geneva, NE at the age of 81. She was one of 4 children in her family. At the age of 2, Faye and her parents moved back to Davenport, NE, where Faye’s parents were raised. There she attended country school and graduated from Davenport High School in 1955. She then went to college for her teacher’s certificate in Fairbury, NE. On November 7, 1962 Faye married Elmer Louis Bonin. They were able to celebrate 45 years of marriage before Elmer’s passing in 2007. Faye and Elmer raised 5 children, Sherry, Debbie, Pam, Brenda and Kevin with most of their years spent in Grafton, NE. In 1978 Faye and Elmer purchased Bar-H in Grafton, NE where they enjoyed serving their “friends” with hot food and cold drinks. In 1983, they sold Bar-H and Faye continued waitressing at various restaurants in Geneva and Fairmont. In the latter years she slowed down and started working at the Grafton Mini Mart and visiting with her customers. She enjoyed her Saturday morning coffees at her house with her wonderful friends. She was able to enjoy many trips with her mother going to various places. She enjoyed spending time with the Fairmont Woman’s Club and being a part of the Elvis “Bill Chrastil” fan club. Faye loved her family dearly and whenever she could spend time with her grandkids, she made the most of it. She loved baby-sitting her grandkids and teaching them the many arts and crafts that she enjoyed. She enjoyed coloring Easter eggs, making doll clothes, painting signs, knitting, gardening, canning and making her own jewelry. She loved to be creative and was proud of her own doll clothing designs. Many children were able to enjoy her doll clothes that she donated to the Christmas Store. In 2010 Faye was diagnosed with lung cancer. She was treated for 4 years and was in remission for two years. In 2014 the lung cancer was re-diagnosed. Through all those years of chemo-therapy treatment she kept fighting! On October 16, she was able to end the fight and was able to join her family in heaven. She is previously joined in Christ with her parents, Clinton and Sadie Simonton, her husband Elmer Bonin, her two daughters, Sherry Fox and Debbie Bonin. Brothers, Howard and Merlin Simonton and sister-in-law LaDonna Simonton and nephews, Clinton Simonton and Kirk Bundy. Mother and Father-in-law, William and Emilie Bonin. She is survived by her daughters, Pam Bonin of York, NE and Brenda Bonin of Omaha, NE and son, Kevin Bonin and wife Heather of Geneva, NE; her 8 grandchildren Brian Bonin of Lincoln, NE, Heather Fox & fiancé, Ryan Dunn of Bozeman, MT, Matthew Fox, Kyle & Megan Bonin of Omaha, NE, Mandy Ingram of KS, Natasha Studey of Omaha, NE, and Madison and Emma Bonin of Geneva, NE. Great grandchildren, Zoey Adams Bonin, Izzabella Ingram, Dakoda Ingram, Shane Jr. Ingram, Jameson Bonin and one on the way. Brother, Dean Simonton, Brothers-in-law Clarence and Delores Bonin, Lawrence and Judy Bonin, Ray and Cheryl Bonin, Kenneth Bonin and Martin Bonin. Sister-in-law Dorothy and Lavern Bundy and many nieces, nephews, cousins and friends.

A Funeral Service for Faye was held on Monday, October 21, 2019, at 10:30 a.m., at the United Methodist Church in Geneva, Nebraska with Pastor Doug Griger presiding. Pianist, Melissa Houchin, accompanied the congregation as they sang the hymn,... View Obituary & Service Information

The family of Norma Faye Bonin created this Life Tributes page to make it easy to share your memories.

Send flowers to the Bonin family.