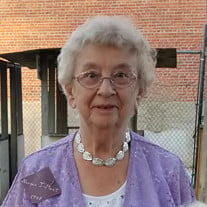 Norma Jean (Most) Kotas was born July 22, 1931 to Louis and Agnes (Sluka) Most of Ohiowa, Nebraska. She passed away at the age of 87 years, 6 months and 20 days in Fairmont, Nebraska on February 11, 2019 after a brief illness. She attended grade school at Fillmore County District #67 and attended high school in Milligan graduating with the class of 1948. On May 11, 1949, she was united in marriage to Jim F. Kotas of Milligan. To this union four sons were born: Dennis, David, Douglas, and Delbert. Norma was a homemaker and enjoyed baking, sewing, puzzles, playing cards, bingo, and making quilts. On October 15, 2016, she completed her 100th quilt. Every family member has a quilt as a remembrance. She was the bookkeeper for Kotas Oil Co. from 1975 until Jim's retirement in 1989. In September of 1989 she took a job as a cook at Heritage in Geneva. The following May she left that job to provide loving care for her daughter-in-law Janet as she fought cancer. She and Jim also took on the responsibility of raising grandsons Jason and T.J. for a time and she babysat with all of her grandchildren when needed. She will be remembered by her family for her loving support and her wonderful cooking and baking, especially rolls and kolaches. Preceding her in death were her husband of almost 69 years, Jim; her parents; daughter-in-law Janet Kotas; grandson Jason Kotas; step-granddaughter Jenny Kelle; brothers-in-law Donald Kotas and Arnold Capek; sisters-in-law and husbands Marie and Charles Vlasak and Henrietta and Marian Arbuck. She leaves to mourn her children Dennis Kotas and wife Lois of Milligan, Nebraska, David Kotas of Fawcett, Missouri, Douglas Kotas and Yvonne Steinacher of Milligan, Nebraska, Delbert Kotas and wife Susan of Juniata, Nebraska; grandchildren, TJ Kotas and wife Abby of Lincoln, Nebraska, Gary Kotas of Humboldt, Nebraska, Katherine Kotas of Portsmouth, Virginia, Justin Kotas of Colorado Springs, Colorado, Emilie Kotas of Exeter, Nebraska and Brittni Kotas of Milligan, Nebraska; great granddaughter Kayla Brhle; and great-great granddaughter Brynlee Motley of Milford, Nebraska; sister Lucille Capek of Milligan, Nebraska; sister-in-law Velma Kotas and husband John Kirby of Lincoln, Nebraska; step- grandchildren, nieces, nephews, cousins, and friends. A Funeral Service for Norma was held on Friday, February 15, 2019 at 2:00 p.m. at Farmer & Son Funeral Home-Kotas Chapel in Milligan. The service was officiated by Pastor Brian Kottas and Pastor Pat Norris. The recorded selections “The Old Rugged Cross” and “ On Eagle’s Wings” were played during the service. Pallbearers for the service included TJ Kotas, Lt. Justin Kotas, Gary Kotas, John Eisenhauer, Gerald Capek, and Roger Capek. Interment was held in the Bohemian National Cemetery following the Funeral Service. Farmer & Son Funeral Home was in care of arrangements and online condolences can be left at www.farmerandsonfuneralhome.com Memorials are suggested to the family for future designation.

Norma Jean (Most) Kotas was born July 22, 1931 to Louis and Agnes (Sluka) Most of Ohiowa, Nebraska. She passed away at the age of 87 years, 6 months and 20 days in Fairmont, Nebraska on February 11, 2019 after a brief illness. She attended... View Obituary & Service Information

The family of Norma J. Kotas created this Life Tributes page to make it easy to share your memories.

Send flowers to the Kotas family.