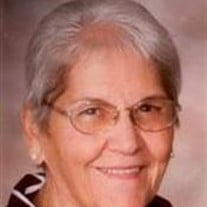 Norma Lavae Saltzman was the middle of three children born to Edward R. Kennel and Neoda E. (Lichti) Kennel. Norma was born on November 17, 1931 in Shickley, Nebraska and passed away on December 22, 2012 at Bryan West Hospital in Lincoln, Nebraska at the age of 81 years, 1 month and 5 days. Norma graduated from Strang Public School in 1949. She attended Fairbury Teachers College where she received a Teaching Certificate. Norma continued her education through correspondence courses. She taught in rural schools for three years, one of which was a country school one mile west of the Salem Mennonite church. Norma and LeVoy Dean Saltzman were married in Shickley, Nebraska on September 25, 1952. They lived on two farms in Fillmore County before moving to their long time residence in Shickley. Together, they were blessed with two children, Kurt Alan and Holly Joy. Along with teaching, Norma worked at Sunset Home for seven years as a nurse’s aid and as the Activities Director. She also worked at the restaurant in Shickley for several years. During this time, Norma helped LeVoy with the farm work. She spent many long hours irrigating and harvesting. Norma was a lifelong member of Salem Mennonite Church in Shickley. Throughout her life, she was involved with many church activities, including Sunday School and Summer Bible School, MYF Sponsor, and Adult Sewing Circle. Norma was always working on a craft project and attending craft fairs with LeVoy. She enjoyed sharing what she made with her family and friends. For more than 20 years, Norma and LeVoy spent their winters in Arizona. Norma liked to call her family members and report the temperature in Arizona while they were back home freezing in Nebraska. Norma and LeVoy loved to play music together and spent many hours entertaining the residents of local retirement homes and at senior centers. She was a talented keyboard and accordion player and especially enjoyed playing and listening to gospel music. Norma is survived by her husband of 60 years, LeVoy; Son Kurt Saltzman and wife Dixie of Lincoln, Nebraska; daughter Holly Johnson and husband Steve of Ong, Nebraska; grandchildren Jenna Theis and husband Jeff of Geneva, Nebraska, and Tiffany Barnett and husband Justin of Gold Canyon, Arizona; two great grandchildren: Halle and Alexa Theis. Brothers Wayne Kennel and wife, Betty and Warren Kennel and wife, Janet, all of Geneva, Nebraska. She is preceded in death by her parents. Services for Norma will be Thursday, December 27, 2012 at 2:00 p.m. at the Salem Mennonite Church rural Shickley, Nebraska. Interment will be in the Salem Cemetery. Visitation will begin Wednesday, December 26, 2012 at 1:00 p.m. until 8:00 p.m. with family greeting friends from 5:00 until 7:00 at the Farmer & Son Funeral Home in Geneva, Nebraska. Memorials are directed to the Salem Mennonite Building Fund.

Norma Lavae Saltzman was the middle of three children born to Edward R. Kennel and Neoda E. (Lichti) Kennel. Norma was born on November 17, 1931 in Shickley, Nebraska and passed away on December 22, 2012 at Bryan West Hospital in Lincoln, Nebraska... View Obituary & Service Information

The family of Norma L. Saltzman created this Life Tributes page to make it easy to share your memories.

Norma Lavae Saltzman was the middle of three children born to...