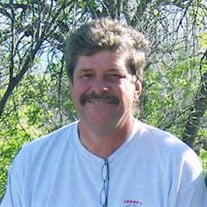 A Memorial Service for Norman will be held on Saturday, March 3, 2018 at 11:00 a.m. at the Trinity Lutheran Church in Bruning, Nebraska with Pastor Stuart Sell officiating. No Visitation - Cremation Private Family Burial Of Ashes at a later date in the Bruning Public Cemetery. Memorials are to be directed to the family for a later designation. Norman Lynn Lemke, son of Alvin and Evelyn (Geiken) Lemke was born on May 20, 1955 in Hebron, Nebraska. He was the fourth of five children in the family. He died unexpectedly, February 13, 2018, at Renown Hospital in Reno, Nevada. Norm was baptized at Trinity Lutheran Church in Bruning, Nebraska, on June 26, 1955; his sponsors were Aunt Berneta Miller and Uncle Glenn Carlson. He was confirmed there on May 17, 1970. Norm attended Bruning Public School and graduated with the class of 1973. After graduation, he partnered with his parents in the dairy operation. Norman and Jenny Long were married at Trinity Lutheran Church in Bruning on March 7, 1980, during a snowstorm. Norm was a fun-loving, free spirited person with a devil may care attitude. Some classmates may recall an incident involving a flag pole. His nieces and nephews benefited from his easy-going personality and there were always good times for them when “Uncle Norm” was around. He once started a young nephew out on a three-wheeler, sure to point out the throttle but neglecting the brake. Norm and Jenny moved to Arizona after the dairy herd was sold in 1985. They later divorced but Norm stayed in the Phoenix area until the summer of 2017 when he spent some time in Ravendale, California. Norman was preceded in death by his parents, Alvin and Evelyn Lemke. He is survived by his sister Mary and husband Dennis Sellon of Blair, Nebraska; brothers Dean and wife Pam, Steve and wife Marisa and Jack, all of Bruning; seven nieces and nephews and 13 great nieces and nephews.

A Memorial Service for Norman will be held on Saturday, March 3, 2018 at 11:00 a.m. at the Trinity Lutheran Church in Bruning, Nebraska with Pastor Stuart Sell officiating. No Visitation - Cremation Private Family Burial Of Ashes at a later... View Obituary & Service Information

The family of Norman L. Lemke created this Life Tributes page to make it easy to share your memories.

A Memorial Service for Norman will be held on Saturday, March...

Send flowers to the Lemke family.