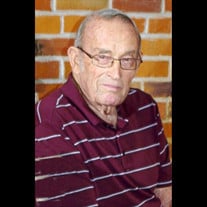 Oliver F. Jensen was born to Frederick and Mabel (Guthrie) on June 16, 1935 on the family’s home place north of Exeter, Nebraska and passed away on January 4, 2018 at Heritage Crossings in Geneva, Nebraska at the age of 82 years, 6 months and 19 days. Oliver attended grade school at District #20 north of Exeter and graduated from Exeter High School in 1952. After graduation Oliver worked at Western Electric in Lincoln where he met his future wife. He enlisted in the U.S. Navy on January 4, 1954. He was a helicopter mechanic on the U.S.S. Oriskany for two years during the Korean War. He was then stationed at the Hutchinson Naval Air Base in Hutchinson, Kansas until he was honorably discharged on November 11, 1957. He was very proud of his service to his country. During his service in the U.S. Navy he was united in marriage to Betty Krupicka on October 15, 1955 in Milligan, Nebraska. To this union, two children were born, Denese and Randall. After serving his country, he was employed at the Chevrolet dealer in Tecumseh, Nebraska until the business burned to the ground. The family then moved to Exeter in January 1965 where Oliver owned and operated his own mechanic business. He then worked as a gravel pumper for Central Sand and Gravel in Belwood, Nebraska until his retirement. After retirement he worked for Orscheln’s Farm Store in York, Nebraska for 15 years with his last date of employment on December 24, 2016. He truly loved his Orscheln family. Oliver enjoyed roller skating and going to dances. Many weekends were spent dancing and playing cards with various card groups. He enjoyed attending activities for the kids, grandchildren and great grandchildren. He was especially fond of working on old tractors, cars, and motorcycles with Randy. He was always tinkering on something. He was a great woodworker and has a great collection of wood toys handcrafted by him. His family was his pride and joy. Oliver was preceded in death by his parents, Frederick and Mabel Jensen; a sister, Engletta; and brother, Carryl. He leaves to mourn his passing, his wife of 62 years Betty Jensen; daughter, Denese (David) Becker; son, Randy (Susan) Jensen; Granddaughters, Melissa (Tim) Moore; Heather Becker; Amanda Beard and special friend, Woody Klinger; and Megan (Dustin) Crawford; Great-grandchildren, Avery and Kennedy Moore; Knox Andreasen; Ryan and Wyatt Beard; and Emmett, Evan, Emsley and Everett Crawford; a niece and two nephews. A Funeral Service was held for Oliver on Monday, January 8, 2018 at 2:00 p.m. at the Farmer & Son Funeral Home – Kotas Chapel in Milligan, Nebraska. Kim Dunker officiated the service. The recorded selections “You Are My Sunshine,” “I Walk The Line,” and “In Heaven There Is No Beer” were played during the service. Pallbearers included Steve Becker, Ron Petro, Roger Ideus, John Volkmer, Dennis Volkmer and Warren Hall. Interment was held in the Bohemian National Cemetery with Military Rites performed by the Milligan American Legion HSSK Post 240. Farmer & Son Funeral Home conducted the services and online condolences can be left at www.farmerandsonfuneralhome.com Memorials are suggested to the Exeter Fire and Rescue and the Milligan American Legion.

Oliver F. Jensen was born to Frederick and Mabel (Guthrie) on June 16, 1935 on the family&#8217;s home place north of Exeter, Nebraska and passed away on January 4, 2018 at Heritage Crossings in Geneva, Nebraska at the age of 82 years, 6 months... View Obituary & Service Information

The family of Oliver F. Jensen created this Life Tributes page to make it easy to share your memories.

Oliver F. Jensen was born to Frederick and Mabel (Guthrie) on...